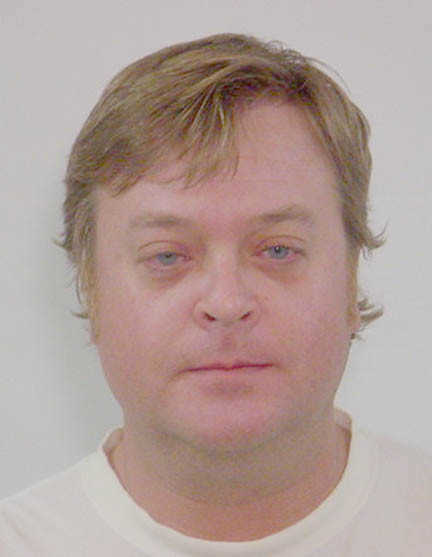 An affidavit of probable cause prepared by ISP Sgt. Michael Wood said he saw Frisbie "travel right of the fog line and onto the shoulder while driving east on Veteran's Memorial Highway approaching U.S. 231."

"At the intersection of Veteran's Memorial Highway and U.S. 231 the truck then made an unsafe lane movement by making a narrow turn north onto U.S. 231 causing the truck to travel left of center into the southbound lanes," Wood's report said.

Wood stopped Frisbie, who identified himself.

"As I spoke to the driver I could smell a strong odor of an alcoholic beverage coming from Mr. Frisbie's breath as he spoke to me," Wood wrote. "I also observed slurred speech, red, glossy eyes and slow and deliberate manual dexterity."

At that point, Wood asked Frisbie to step out of his vehicle.

Wood attempted to put Frisbie through field sobriety tests, but "Due to his intoxication and unsteady balance I suspended all tests and read him Indiana Implied Consent and placed him in handcuffs, double locked and checked for tightness."

Wood read Frisbie his Miranda Rights, and Frisbie was transported to the Putnam County Jail. There, Frisbie "provided a breath sample that had an alcohol concentration equivalent to .27 grams of alcohol per 210 liters of breath with a certified chemical test after a 20-minute observation period."

The legal blood alcohol concentration limit in Indiana is .08 percent.

"Due to his high level of intoxication (Frisbie) was transported to the Putnam County Hospital, where he was checked and treated by hospital staff," Wood's report said. "The hospital also took blood samples to confirm the levels of intoxication."

According to court documents, while he was at the hospital Frisbie said, "I admit it, I'm guilty. There's no reason to fight it; .27 is extremely high."

All reports have been forwarded to Putnam County Prosecutor Tim Bookwalter. Frisbie is set for an initial hearing Wednesday in Putnam County Circuit Court.

Frisbie resigned as Putnam County sheriff in August 2008 amid allegations that he had embezzled money from the sheriff's department. He was convicted in November 2008 of federal program theft, and entered the United States Penitentiary satellite camp in Atlanta, Ga. On Feb. 2.

He was released from the camp on March 31, and served four months on home detention before beginning a two-year term of federal probation.

Bookwater said he had received a telephone message from Frisbie's federal probation officer requesting documents, but that he had not spoken to the officer.

"I don't know what will happen there," Bookwalter said.

Bookwalter said he assumes Frisbie will have to go back before the judge who sentence him, Larry McKinney, to be sentenced for violating the terms of his probation.

Comments
View 11 comments
Note: The nature of the Internet makes it impractical for our staff to review every comment. Please note that those who post comments on this website may do so using a screen name, which may or may not reflect a website user's actual name. Readers should be careful not to assign comments to real people who may have names similar to screen names. Refrain from obscenity in your comments, and to keep discussions civil, don't say anything in a way your grandmother would be ashamed to read.