NPSC assists in protection of forest 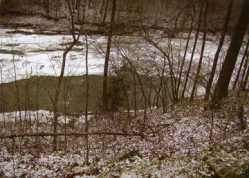 Big Walnut Creek runs through protected land in northern Putnam County. A land swap between North Putnam Community Schools and the Indiana Nature Conservancy is featured in the organization's magazine.

One of the last things retired North Putnam Superintendent Murray Pride did before ending his term last summer was to get approval for the swap of 24 acres of natural ground for 20 acres of fallow agricultural ground.

The swap is featured in the Fall 2009/Winter 2010 edition of the Indiana Update magazine published by the Nature Conservancy in Indiana.

The Nature Conservancy, working in partnership with the Indiana Division of Nature Preserves (DNP), has worked with property owners for over three decades to secure permanent protection for the forest area around Big Walnut Creek.

Back in April, Pride asked the North Putnam Community School Board to approve the swap that includes land at the back of the Middle School abutting Fortune Woods Preserve. The land exchanged by the school is a strip of fallow fields along the highway in front of the school property.

Pride gave credit for the idea to board member Andy Beck, who planted the seed for the exchange.

"Andy Beck made the suggestion and pretty soon we were walking through ditches and fields. And he did it at his second board meeting," said Pride at the April school board meeting.

The Conservancy has been active in the area since 1977. At one time the forests along Big Walnut Creek reached from the valley floor up onto the plains where cornfields now stretch as far as the eye can see. The endless woodlands stood tall until the early 1800s, when settlers began clearing the land for farming.

By the 1850s, most of the upland forests were gone and the land was divided into individual holdings. But trees stood where the land began to roll and where the ravines dug deep into the farmland.

The dominant feature of Big Walnut is the creek itself. The clear, clean waters sustain a unique assortment of aquatic fauna. There are also steep ridges and deep ravines as well as extensive older forest stands and secluded coves with immense walnut trees.

According to the article in Indiana Update, "Conserving the farmland around the woodland preserve and preventing conversion to residential development helps maintain the wildlife and buffer the forests from conflicting land uses by individual homeowners."

The land swap allows the Conservancy to protect land closer to the Big Walnut core reserve.

Pride told Conservancy members that the land exchange was a "win-win" for both sides.