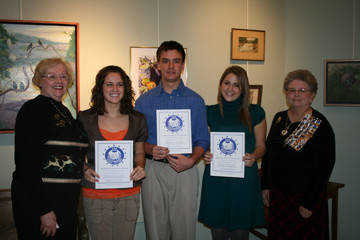 Amanda Lund from South Putnam High School was named as the Putnam County winner of the Daughters of the American Revolution (DAR) Good Citizen Award Monday. She is pictured to the right of jinsie Bingham, DAR Good Citizen Chairperson. Also pictured are students Bryce Tomlinson of Cloverdale and Dakota Parent of North Putnam High School and Sharon Baldwin, Regent of the Washburn Chapter of the DAR. Lund will go on to compete in the statewide contest.

GREENCASTLE -- Every year, the faculty members of the Putnam County schools select one member of the senior class to represent their school in the Daughters of the American Revolution Good Citizen county competition. This year's county winner is Amanda Lund from South Putnam High School.

Three students were chosen this year to participate in the competition. They are Bryce Tomlinson of Cloverdale High School, Dakota Parent of North Putnam High School and Lund.

Students are selected for having a variety of interests, positive contributions to home, church and community; and qualities such as dependability, honesty, leadership, cooperation, self-control and initiative.

Students write an essay for the contest. This year's title was "Our American heritage and our responsibility for preserving it: What is the greatest challenge we face in America today?"

Lund wrote in her essay that the biggest challenge our country faces is "our population not agreeing and not getting along with each other. A lot of people have different views and it's hard for our country to remain beautiful with all the disagreements going on."

The senior talked about the diversity of the population in America, the division into political parties and ethnic groups, the importance of the government in making decisions and the bravery of the president.

"Our country is a wonderful place. The different groups that we have make us original but sometimes hurts us. We need to think of others, back up our government and president, and remember we live in a great country that needs to be showcased as one," continued Lund in her essay.

Lund's essay is now entered in the statewide competition sponsored by the Indiana Daughters of the American Revolution.

All three students were recognized at the annual Good Citizen Recognition Tea held at the Putnam County Museum Monday.