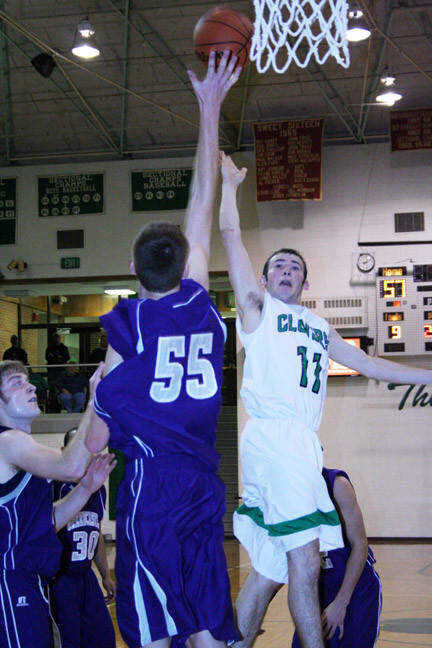 CLOVERDALE -- Christmas came early for fans at Cloverdale Friday night. The host Clovers pulled out a one-point overtime victory over Greencastle in the teams' first West Central Conference battle of the season.

The Clovers defeated GHS less than a week ago for the county championship and won 62-61 Friday on the strength of a Brandon Moon three-point bomb with 2-seconds left in the overtime period.

"It's a great win, because when you play a county rival and play them so quick back-to-back -- it's very tough," head coach Pat Rady said.

GHS began to chip away at the Cloverdale lead in the third quarter, but it was in the final eight minutes of regulation where they really turned up the heat. With 1:09 left in the contest, GHS was down six, but a Nick Hutcheson bucket and a reverse lay-up from Jordan Hickam had the Tiger Cubs within three points with less than 35 seconds to play.

Senior Eric Embry stepped beyond the arc with 31 seconds to play and buried a three to bring GHS within one. Greencastle had a chance to win the game outright, but junior Keith Carr missed the front-end of two free throws, but by connecting on the second, he sent the game to the extra period.

The overtime was something to behold. Both teams breathlessly attacked each other, trading basket after basket. With ten seconds left, Cloverdale called timeout down two at 61-59 and set the stage for one of the team's biggest shots of the season thus far.

Assistant coach Patrick Rady grabbed the marker and board and laid out the plan before the Clovers, now all there was left to do was execute -- which they did to perfection.

They got the ball to the top of the key, waited for Moon to pop out from a screen, where he rose and scorched the net, putting the Clovers up 62-61 with 2-seconds left and sending the Cloverdale fans to their feet. Greencastle failed to get the shot off and Cloverdale held on for their fourth win of the season.

It might have been Moon whose shot iced the game, but for Rady, the game was a complete team effort.

"Coach Rady called the play, but we still had to make the pass, we had to make the correct screen and then Brandon (Moon) had to hit the shot," he said. "You just can't get hung up on one player, it was a team. A coach called the play, but our players had to execute. It's a play that we work on. It's something we do and we worked on that shot several time," Rady commented.

Rady also made it clear being at home and two seconds on the clock, there was only one thing on his mind -- go for the win.

"I know you take a chance, but at home -- we were going to play for the win. It was still a team effort. You don't win a game like this without being a team. Even the guys who didn't get in, they played hard this week in practice and make our five work hard," Rady said.

Rady acknowledged the team had actually worked on the same play the evening before, and on Friday, the work definitely paid off.

Following his team's third loss of the season, GHS head coach Troy Greenlee described how tough the loss was and the reasons why.

"It's really rough from the fact that I was so proud how our kids came back in the second half and got us in a position to win the game and forcing it to overtime," Greenlee said. " I told them, just talking to them then, I was really proud of them with the way they didn't quit and they battled back to that point. I just really thought that coming out into the overtime, we just didn't stop and kept playing well offensively.

"We struggled to get some stops, but you have to give Cloverdale some credit, they hit some big shots -- and Moon hit a huge shot there at the end. Again, it's disappointing because we were so close and we were right there -- just one possession, one possession," he said.

He also noted that a game such as this has huge ramifications because of it being a county and conference battle. He also pointed out these are the games late in the season, where a team looks back and realizes how huge they really are.

Up next for GHS will be Sullivan and Greenlee knows that his team will have to rebound from its tough loss and be ready to play in a hurry.

Fans again got a look at a Cloverdale team that was controlled and played within its offense. In past years, Cloverdale could have been described as a run-and-gun squad only, but as the season has shown so far, they are an offense that can execute and exploit any team's defensive weakness. In turn, it helps out their defense as well.

"That's also another way you can stop a run. They had a run going, so we wanted to try to take some time off the clock because they were doing things well, so we wanted to slow them up a little bit," Rady commented.

Cloverdale looks to extend its winning steak against Clay City Tuesday at 7:30 p.m., while Greencastle will battle Sullivan on the road tonight at 7:30 p.m.

Next game -- Cloverdale looks to extend its winning steak against Clay City Tuesday at 7:30 p.m., while Greencastle will battle Sullivan on the road tonight at 7:30 p.m.