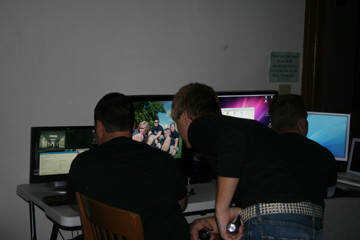 Hoosier State Paranormal investigators Daniel Hendry, Christopher Lein and Nate Lein look over their camera set-ups prior to an investigation at DePauw University. The group recently celebrated their one-year anniversary.

GREENCASTLE -- With the winds blowing and the temperature outside dropping, most Putnam County residents were tucked warmly in their homes last Tuesday night. But a group of paranormal investigators were indifferent to the weather outside as they explored Old Toppers Restaurant.

A little over a year ago, the Hoosier State Paranormal group began investigating ghost sightings around Putnam County. So far, the group made up of mostly local residents has explored homes and buildings believed to be haunted.

Christopher Lein, a graphic design student in Bloomington who is also an EMT at Operation Life, started the group.

"I approached my sister, brother and some of our closest friends about starting a group that turned in to HSP. Fortunately, everyone was genuinely interested, supportive, and motivated and our paranormal investigation was born," explained Lein, who oversees all the investigations and operations of the organization.

"We watched TAPS (The Atlantic Paranormal Society) on television since 2004. We were all interested in what they did and it made us want to try investigating," commented Lein.

TAPS is a one-hour weekly reality show that follows a group of real-life paranormal researchers as it investigates hauntings throughout the country.

HSP is made up of 12 other members besides Lein and includes local residents, DePauw University students and Putnam County Operation Life Emergency Medical Technicians including Matthew Nance and Megan Soultz, who gained local notoriety after participating in the rescue efforts of the jet that crashed into the Hudson River last year.

The group is comprised of both skeptics and non-skeptics and includes mostly college students ranging in age from 18 to 25.

"When we're not doing school work, we are interested in paranormal research because we want to give people a better understanding of what it is or even, what it is not," said Lien.

Not all the members are students. The group's mentor John E.L. Tenney has been actively involved in the field of paranormal-conspiratorial-phantological research. He has investigated approximately 500 cases of hauntings, UFO encounters, cryptid sightings and related psychical-heterodoxical events.

Tenney has also authored dozens of articles for magazines and newspapers worldwide and lectured extensively to public and private schools, universities, clubs and organizations. He currently works in the field of advertising design, specializing in the use of graphic arts, communication modalities and semiotics.

Computer IT/Video Tech Manager Daniel Hendry has a degree in Computer Science and owns a computer company based in Indianapolis. He has years of experience in background lighting.

"Nate Lein and I work side by side through most investigations, and put our results together to assist with the group to formulate reasons and explanations of our findings," explains Hendry.

Nate Lein handles the audio recording of the investigation. His sister Savannah Wise not only investigates, but also is the group's researcher.

Reflecting on the past year, Lein believes HSP has established a positive presence in the paranormal world.

"We have some awesome goals for next year that will help us keep advancing that presence," said Lein.

In the past 12 months, HSP had completed over 10 investigations, purchased a lot of equipment and expanded their organization into two branches.

Locally, HSP has investigated several homes as well as the Old East College Building on the DePauw Campus, the DePauw University library archives where Gov. Whitcomb's book collection is housed, and, most recently, Old Toppers.

The group posts their findings on their Web site www.hoosierstateparanormal.com. They have electronic voice phenomenon, including those of a little girl crying in a home in South Bend and sounds recorded during the DePauw University Library investigation. You can also follow the group on Facebook.

HSP doesn't charge any fees for investigations and is willing to talk to anyone with a home or building they would like investigated. You can contact them through their Web site www.hoosierstateparanormal.com