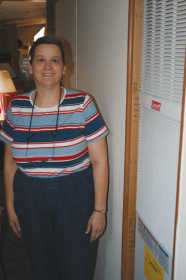 Angie Farmer of Poland shows off the new furnace installed in her home courtesy of Rebuilding Together Owen-Putnam.

POLAND -- Angie Farmer has spent a lot of time the past few weeks scrubbing the walls and ceilings in her mobile home.

"You can see right where I stopped," she said, pointing out a distinct spot on the ceiling between her living room and kitchen where the color changed from bright, clean white to dingy brown.

The discoloration in the Farmer home was a result of having to rely for a year on kerosene heaters. Angie and her husband Jerry, who have lived in their home in Poland since 1990, have both faced significant health problems in the past few years, and when their furnace failed last December there was no money to repair it.

Rebuilding Together focuses on helping the elderly, the disabled, and families with children who are restricted by low income and need help to make necessary repairs and maintenance to their own homes.

RTOP provides these services at no cost to the homeowners and relies on the generosity of businesses, churches and individuals to make these projects possible.

Rick Smiley of Smiley's Heating and Cooling did the installation for the Farmers. The project was paid for largely through funds raised by an event in November hosted by the Putnam County Board of Realtors.

"It sure feels different in here," Angie said with a smile. "And now we don't have to sleep in four-hour shifts to watch the kerosene heater."

Jerry Farmer was diagnosed with testicular cancer in 1992.

"He almost died," Angie said. "But the Lord didn't want him to go yet. I guess he went back to work after a year."

The plant where Jerry was working closed in 2001, leaving Angie, who worked in Indianapolis as a bill collector, as the family's main breadwinner.

Angie was stricken with uterine cancer in 2005. She underwent a complete hysterectomy, and complications kept her from working for some time.

Then in December 2006, doctors discovered Angie had cataracts.

The Farmers continued getting by as best they could. They had a tank of propane delivered in November 2008, only to discover their furnace wasn't functioning.

"We turned it on, then went out to get groceries," Angie said. "When we came back, the house was still cold. The pilot was still lit, though."

Angie and Jerry had a repairman come look at the furnace.

"They shut it down and tagged it," Angie said. "And told us it would cost $1,800 to fix it. We were barely getting by and they couldn't do payments. No one could help us. We tried to sell an old ring, even, but we couldn't get the money."

So the Farmers began heating the large areas of their home with a kerosene heater and keeping the pipes in their bathroom and kitchen thawed with electric space heaters.

"We had to do that all winter, and it was really kind of scary," Angie said. "You hear about so many fires that start from kerosene heaters."

Angie is not able to work right now, but Jerry is a full-time driver for Putnam County Rural Transit.

"I'd never heard of anything like (RTOP)," Angie said. "I came across a newspaper article about it ... we applied and we qualified. It was wonderful. We had nowhere else to turn."

The Farmers' furnace was the third provided to local families by RTOP in the past three years.

RTOP, which is mostly funded through corporate grants and a fund housed at the Putnam County Community Foundation, is gearing up for another year of building projects.

"We're soliciting folks to apply," said Tom Woodley, RTOP director. "We're looking for all types of people who want to get involved ... people who need the help and people who want to help. We need volunteers, people to contribute and we need skilled craftspeople."

This year's RTOP build date has been set for May 1. Historically, the build has taken place the last weekend in April, but Woodley said it overlaps with the local Relay for Life fundraiser for the American Cancer Society, so it was bumped back a week.

"There is a real need out there," Woodley said.

A clergy breakfast is planned for Jan. 13. That event, which will be held at Walden Inn, is open to clergy and representatives from any area churches that would like to participate in RTOP's 2010 projects. Another breakfast for local business people who would like to get involved will be held later in January, Woodley said.

For invitations to either breakfast, call Steve Newland at 653-5817.

"We'll tell them about Rebuilding Together," Woodley said. "It's going to be very personal. We'll introduce them to the people we've helped and the people we're going to help."

Applications for assistance can be found online.