Salvation no savior for Terminator series 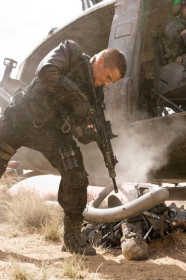 Domo arigato, Mr. Roboto -- you nearly killed a franchise. That was my first thought when I saw the trailer and early footage from McG's Terminator Salvation. But after checking out its DVD release, I found myself intrigued, yet ultimately left wanting.

The latest installment of the Terminator franchise is like great Chinese food -- shortly after you feel nice and fulfilled, but 15 minutes later, you'll be hungry for more. The flick has all the bells and whistles and a decent story, but for more than one reason, the film lacks punch the previous installments had.

The biggest downfall for the film, and I hate to say this, but is in Christian Bale as John Conner. I've been a fan of his throughout his career, but I found his performance in Salvation very one-dimensional and uninteresting. He uses a variation of his Bruce Wayne growl and seems to be yelling the entire film. This is the only flick I've seen of his that I wasn't engaged with the character.

Sam Worthington is another in a long line of Aussie tough guys. Worthington portrays lead character Marcus, an inmate who was put to death in 2003, only to awaken in 2018 with heightened abilities and little knowledge of what has happened. He quickly encounters Kyle Reese, and after Reese is captured, he sets out to Skynet to rescue him.

Along his journey, he finds out the terrible truth of what he has become, then ultimately redeems himself.

I'm also not a huge fan of inserting memorable dialogue from past films into new releases. Of course, "I have a bad feeling about this", and all the lines in the new Star Trek flick are an exception. Those flow and are woven into lines where they don't shout their existence. On the other hand, there are moments in the film where you'll recognize the dialogue and shudder. It is forced to say the least.

The film is not bad on its own, but since it tagged with the Terminator name, if falls short of what fans of the franchise have come to expect. It's a movie that you continually ask yourself why you didn't like it. It has pretty much everything you'd want in a film, but as I stated before, something is missing.

The copy of the flick I received to review is a bare bones, no frills edition of the film. No special features -- nothing.

The good news: It comes with a digital copy of the film. The bad news: It's a Windows Media download. In short, if you have an iPod -- you're out of luck. Not quite sure the thought process behind this move, but I'm sure the powers that be at Warner Bros. have a master plan.

Final Cut: While Terminator Salvation is a movie that has its enjoyable moments, it doesn't really fit into the franchise that well. Lovers of the series will easily point out inconsistencies, which there are more than a few, and plot points that do nothing to move the story. Plus, you never care if Connor does his part to save the future or not. This, more than anything else, kills what could have been an alright film.

MPAA Rating: PG-13 for intense sequences of Sci-Fi violence and action and language

Available now on DVD and Blu-Ray