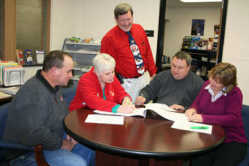 Andy Beck, Pam Smith, Terry Tippin, Jason Hartman and Joanie Knapp look over the database information they are compiling on North Putnam alumni. The alumni association, formed back in April, is looking to hear from past graduates and attendees of the school.

ROACHDALE -- After 40 years of not having an alumni organization, North Putnam High School graduates have come together to form an association open to any NPHS graduate, teacher, staff member or person who attended the school over the last four decades.

The group formed last spring and named a board of directors and officers for the organization.

"We have someone from every decade on the board, including a person from the first class to graduate in 1970," explained Jason Hartman, president of the NPHS Alumni Association.

Their objective is to promote fellowship of all former students, friends and teachers associated with the school and to preserve the history of the school and support its present activities.

"We want to collect and preserve memorabilia from the history of the school, sponsor annual gatherings, support the administration in their education objectives and administer a North Putnam High School Scholarship Fund," said Hartman.

The first ever alumni banquet is being planned at North Putnam High School on June 19, 2010. An after event will follow at the Bainbridge Community Center.

The group has about 1,900 good addresses out of the approximately 4,000 students who have passed through the school in the last 40 years.

"We plan to send out a mailing in January. We're looking for more information on students, teachers and staff who have been part of NPHS. We need their maiden and married names, address, e-mail and phone numbers for the database," said Hartman.

The group plans to have a Web site up soon where alumni can log on and update their information and stay in touch with one another.

Membership is open to graduates of NPHS and yearly dues will be charged. The amount has not been set, but will be soon by the 21-member board of directors.

The board may confer honorary membership for any person who has performed outstanding service for NPHS Alumni Association or scholarship fund.

"We really want to fund student scholarships, teacher scholarships and assist with special projects at the school," said Hartman.

The group is in the process of applying for 501 (c) status. Hartman is the president. He is a 1989 graduate. Joanie Knapp, class of 1978, is the vice-president, Amber Russell, class of 2000, is the secretary and Lana Grenard, a 1978 graduate, is the treasurer of the group. Board meetings are held on the third Monday of each month at 7 p.m.

Hartman can be reached at 720-7462 or by e-mail at jasonthartman@yahoo.com