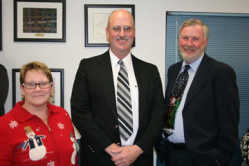 North Putnam Community School Superintendent Mary Lovejoy says goodbye to board member Mark Fordice and Bainbridge Elementary Principal Dean Cook. Fordice is leaving the board after serving for 16 years and Cook is retiring after 20 years as an administrator and 17 1/2 as a teacher.

BAINBRIDGE -- North Putnam School Board members said goodbye Thursday to fellow board member Mark Fordice, who is leaving the board after 16 years, and to Bainbridge Elementary Principal Dean Cook, who served 20 years as principal at the school.

Fordice jokingly told several of the staff in the audience that he hired them.

"I've hired a lot of you guys over the last 16 years. Things have changed, especially with the recession the last years. I'm the lucky board member, I'm leaving. There are going to be some very tough financial decisions ahead. Cutting financials means cutting into lives. It's important people support this board and their decisions," he stated.

Superintendent Mary Sugg Lovejoy agreed with his statement and thanked and Fordice for his years of service.

Mark Hoke will replace Fordice on the board.

Principal Cook is also leaving the school system after 20 years as an administrator and 17 1/2 as a teacher.

"We all know where to find you," laughed several board members. "He'll be on the golf course."

Both men received plaques for their service. A cake and punch reception followed the meeting.

In other business, the board approved extending a $2.5 million loan payment that is now due. It is from a $4 million loan taken in July.

"We are unable to repay the $2.5 million now and can carry it over by just paying interest," Lovejoy told the board.

Fordice questioned if the loan would be repaid in two weeks when they receive funds from the state.

Lovejoy answered, "We'll do everything we can do to pay off the $2.5 million as quickly as possible." She noted that the general fund has a $1.4 million debt and there is the likelihood of a $600,000 cut from the state.

The board voted to carry over the loan.

They also agreed to balance appropriations with all funds to close the 2009 budget and gave permission to Lovejoy to advertise for 2010 fuel bids. 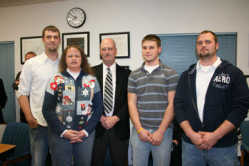 Mark Fordice's entire family was in attendance for his final meeting as a member of the North Putnam School Board.

Permission was also given to the newly formed North Putnam Alumni Association to use the high school facility for an all class reunion on June 19, 2010.

Dr. Lovejoy gave a quick presentation on a survey that will be given to staff, family and community members in February called the NEA KEYS 2.0 Initiative.

The survey is taken online and is provided free from the North Central Accreditation.

Based on 42 indicators, it provides data for schools to determine how they are doing in numerous areas.

Personnel approved included: Linda Patrick as science teacher at NPMS. Resignations of Paula Batchelor and Tina Farmer, both from the NPMS cafeteria.

The retirement of Glenda Jackson, Manager of the NPMS school cafeteria, was also approved.

The resignation of Betsy Fouts from the middle school as the Teens Against Drugs Leader was also approved.

At the end of the meeting, board member Carl Blau spoke briefly about attending the Area 30 General Advisory Board meeting and hearing a discussion about students being trained in areas for business.

He mentioned that Greencastle Superintendent Robert Green told them he receives 250-300 applications for every elementary teaching position and that more and more students are going into the education field.

He also talked about an Area 30 student who took Veterinary technician classes and now was at Purdue in the Vet program.

Blau's point was to emphasize giving students at Area 30 opportunities and careers that truly exist.

The North Putnam School board meets on the third Thursday of the month at 7 p.m. at the corporation headquarters in Bainbridge.