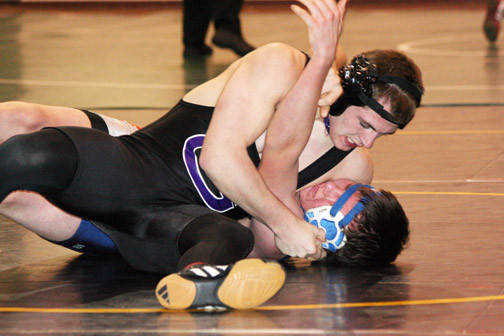 Greencastle grappler Jesse Vermillion won the 160 weight class with a 3-0 record. Greencastle won the team championship by finishing 3-0 on the night.

Greencastle head coach Matt McComish was pleased with the effort his Tiger Cubs gave Thursday and was happy with the lift his younger wrestlers gave the team.

"We had young guys come through for us once again," he said smiling. "Hunter Smith finished the day really nice. He had a few good matches. Carter Lewis had another good match for us. Jesse Vermillion and Jesse Ford wrestled well for us. Nikko Hayden was a surprise at 215. He wrestled really well.

"Blaine Fenwick, at 189, wrestled well, he just needs some more seasoning on the mat. You have all of those freshmen in there and we just have to keep getting better," McComish said.

Vermillion, Ford, Hayden, along with Kody Collins and Trevor Teal, won individual honors on the night for GHS.

Although McComish was pleased with his team's performance, his mind is always on getting better and Thursday was no exception.

"We made our fair share of mistakes, no doubt about it. We wrestled some tough kids tonight. County wrestling -- it's not bad right now. There was a nice crowd here. Wrestling in the county is getting good," he said.

"Forfeits still hurt us," Kerns said. "I'm so happy with the way the kids wrestled. I'm real pleased with the kids. They wrestled well, they showed people that, hey, we're not just North Putnam."

Boruff battled Cloverdale's Matt Hall in the third round and it took multiple overtime periods to determine a winner. Boruff continued to attack and didn't seem to lose much steam, a fact Kerns attributed to the Cougars' practice regimen and a positive frame of mind.

"We condition quite a bit every night and the kids at first argued about it, but then they started to think that maybe it was helping us," Kerns commented. "Some of the kids said tonight 'Man, they hit a wall didn't they', and so our conditioning helped us and the kids attitudes.

"I've said that we don't have a lot of kids, but this is probably the best year I've ever had as far as kids wanting to go out there and work hard, bust their butts and do this and do that. They're on each other, helping each other out -- it's fabulous. The kids have been great," he said with a grin.

Last year's winner Cloverdale didn't fare quite a well as they had hoped on Thursday. Head coach Steve Livingston said he's looking for his role players to step up and give the team what it needs.

"We still had our guys that we thought would do well, do well," Livingston said. "A couple of things that frustrated me, we've got role players on every team and we're having trouble getting our role players to understand that if you're going to lose a match, you just can't get pinned.

"It really played out in the North Putnam duel, where the final score ended up being 33-31 and we had one kid that lost that didn't get pinned. You can't expect to win every single match, but when you're giving up four weight classes, the matches you lose, you can't be getting pinned," he said.

Shawn Shipp (112) and Jeremy Boldman (135) were crowned All-County Thursday and another wrestler sacrificed his own moment to shine in hopes of helping the team better itself.

"The one kid that I thought really, just personally, I was proud of more than going 3-0 was the example he set for our team as captain was Donnie Helterbrand," Livingston commented. "He could have been All-County at 145, but he had a forfeit against North Putnam. Our ultimate goal, and his ultimate goal, is the sectional and after that the state tournament. He knew he's not going to be a better wrestler getting a forfeit. He wants to prepare for that sectional and the only way to prepare is to wrestle matches against kids that aren't in our room that he wrestles everyday.

"It said a lot about his character and about how serious he is about wanting to do well. By him bumping up and sacrificing being All-County to go up to 152 to wrestle to wrestle a match and he still went 3-0," he added.

The Eagles of South Putnam had three grapplers win their weight classes and be named All-County. Those were Devin Buis at 145, Jesse Gardner at 152 and Chris Hurst at 285.

South Putnam head coach Josh Hendrickson noted the hurt giving up forfeits put on his team, but was proud of his team's performance.

"Obviously giving up so many forfeits you can't fight for a team championship. Three out of nine isn't bad I guess. It was a pretty good day -- they wrestled hard. We're getting better," he said. "They've gotten a lot better. We've obviously lost some kids, but the ones that have stuck with it are doing a lot better and doing really well and practicing hard."

Hendrickson was impressed with his three champions and sang their praises following the match.

"Chris Hurst was pretty impressive with three pins. Jesse Gardner -- that was a big surprise, not a surprise because he's a good wrestler don't get me wrong, but it was a great showing from him. He actually had a little injury he had to overcome and deal with that and still got the victory, so that's pretty good. Devin just -- he's good. He came out and took care of business," Hendrickson said.

Even though his team captured the overall title, McComish commented that he's always looking to improve. He said it would be a matter of looking at the tape from Thursday and prepping for their next match.

"I always want us to be better than what we are. I always think we're making mistakes that we shouldn't make and that's what we practice for. We'll back to work tomorrow correcting those mistakes and wrestle hard on Saturday," he said.

Echoing what he said earlier, North Putnam's Kerns thought his team showed they could hang with the big boys after their performance at the county match.

"I'm excited about this. We showed enough today that we could have won county, but Greencastle wrestled great. They beat us, they beat everybody, so they deserve it. I think that the kids realize now that they can be competitive. That's just the good seed we need," he said.