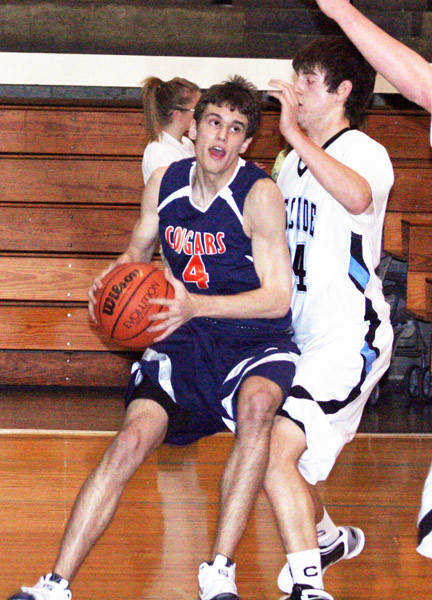 Cougar James Hedrick drives to the basket during Friday's matchup with Cascade.

CLAYTON -- With some clutch free throw shooting from Travis Franklin and Tim Wiltermood, the North Putnam Cougars got an early Christmas present Friday night when they knocked off Cascade,71-66, in their first West Central Conference matchup of the season.

"This was a big win for us because it is a conference game and it was on the road," NPHS coach Nathan Martindale said. "And any time you can get a win on the road, especially in conference play, it's a huge confidence booster."

And it all happened within the last minute of the game.

With just over a minute to go, Cascade got within three, 65-62, when Tanner Dunn sunk two from the charity stripe. Then moments later Jeffery Hopper was running down the court on a fast break, nailing the bucket to put Cascade within one.

With the seconds slipping away, Travis Franklin tried to drive into the paint to give the Cougars a little extra cushion or at least force the Cadets to shoot a three, but was fouled going up and sent to the line. With the game on the line, Franklin held his composure and nailed both freebies, giving the Cougars another three-point lead with 17 seconds left.

Then just like clockwork, Hopper hit another fast-break layup putting the Cadets within one again. But with the clock still running, Cascade did the only thing it could do to stop the clock -- foul -- and hope the Cougars miss their free throws.

It didn't happen that way.

"Travis and Tim stepped up and knocked down some crucial free throws for us at the end," Martindale said. "Coming into this game we knew that free throws are going to win us games and we haven't been shooting the free throw well so far this season. We missed some early on in the game that I think would have alleviated some of the pressure that we were feeling at the end and we could have iced the game earlier because this was the best basketball we have played all season. But the bottom line is that we hit them when we needed too."

North Putnam stormed out of the gate in the first quarter, outscoring the Cadets 27-15, but a mediocre second and third quarters, allowed Cascade to get back into the fight. The Cadets actually took the lead with 4:11 to go in the third, when Hopper drove into the lane and layed into the basket, drawing the foul for the three-point play. But North Putnam answered right back with eight unanswered points, putting them back on top for the rest of the game.

"We did have a couple of lows there in the second and third quarters and that is something that I hope that we become more consistent with as the season goes on," Martindale said. "But overall these kids just kept fighting and they really earned this win."

Four of the Cougars were in double digits for the night. Franklin, Brock Jones and Jacob Lucas led the team with 14 points each while Kyle Adams chipped in 10.

The Cougars are back in action today when they host Riverton Parke at 7:45 p.m.

Next Game -- The Cougars are back in action Today when they host Riverton Parke at 7:45 p.m.