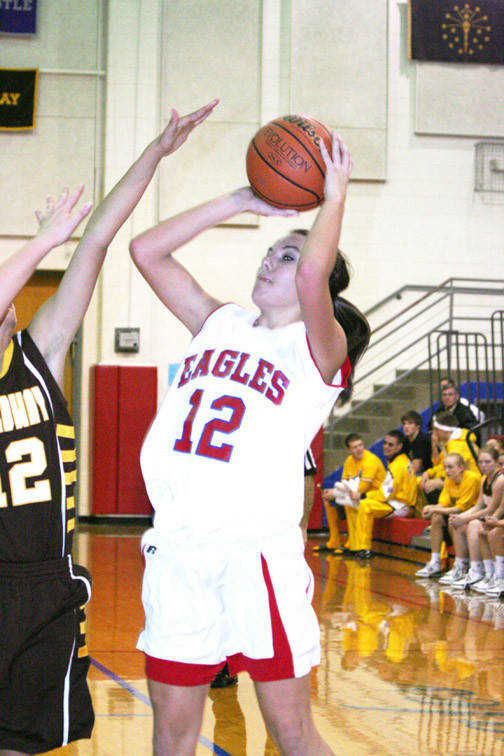 GREENCASTLE -- Again, it was a sluggish start that plagued the South Putnam girls' basketball squad. The Eagles were only able to put up five points in the first quarter, a deficit they wouldn't be able to overcome.

South Putnam (2-8) showed some tough, physical play late in the game, but lost the game 53-40 and it was that slow start that head coach Debbie Steffy spoke about following the contest.

"We need to fight in the first quarter," Steffy said. "This has been our problem all along, we'll play some games OK, then we'll get behind. Then we have to fight so hard to get back into it and then it just doesn't happen. Tonight, we just got behind from the get-go. We're doing, the first quarter, we're down 5-15 and we can't do that. We can't fight back like that.

"We're averaging and giving up something like 50 or 53 points a game and we can't do that. We've got to play better to start the game. We've tried different things as far as to start the game. We've tried different presses, we've tried not pressing, we've even gone to changing things around what we do before the game a little bit differently, so we've go to find what works for us. But we have to come out firing on all cylinders, ready to go and be able to carry that over as the game goes on," she added.

South Putnam came out from the half down 31-16 and showed a fire that has seemed to be lacking at times and showed what they are capable of.

They cut the lead to single digits early in the third quarter, but found that Speedway would counter every South Putnam bucket with one of their own. The biggest change in the Eagles' gameplay came in the fourth when they answered the Sparkplugs physical challenge with some physicality of their own.

The officials let the players bump and tug, with the Eagles giving ground for three quarters, but in the fourth something changed. Sophomore Brooke Boetjer had battled Speedway's Shaley Anglea down low all evening, with Anglea being the aggressor.

Midway through the fourth quarter, the two bumped, with Boetjer sending Anglea to the ground. Two Sparkplug possessions later, Boetjer recorded a block and the Eagles began to make a final push as the clock waned.

South Putnam outscored the Sparkplugs 24-22 in the second half, but came up short 53-40.

Turnovers were a big issue once again for the Eagles, or more precisely, unforced turnovers. South had double-digit turnovers in the first half and that's something Steffy acknowledged the team needed to get a handle on.

"Our goal is 15 or less a game and we got 12 in the first half," Steffy commented. "And a lot of those weren't forced turnovers. We picked the basketball up, and nobody's on us, but we pick it up and throw a bad pass. We've just got to do the little things right and we're not doing that right now. We've got time to practice before the Holiday Tournament before the second half of the season and we'll try to get things righted and get back on the winning side of the ledger.

Steffy once again commented on the team's need to get a jump early in the contest and stated they need to find what gets them going, as a team and as individuals.

"I think we struggle with that sometimes," she said. "I don't mean that to put any of our kids down because I love all of our kids. They're great kids, they work hard, but sometimes they don't work as hard as we ask them to work and then they wonder what's going on.

Brooke Boetjer led the team with 10 points, followed by Kelsey Searles with seven and Leanna Masters and Emily Dabkowski with six each.

South Putnam will be back in action in the South Putnam Holiday Tournament Dec. 30 at 9:30 a.m.