Cute on the outside, beautiful on the inside 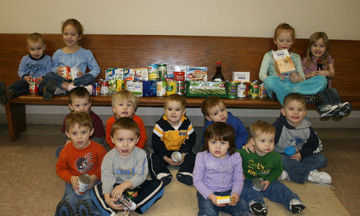 GREENCASTLE -- The youngsters who attend the Roundbarn Daycare at the Greencastle Presbyterian Church aren't just pretty to look at -- they are beautiful on the inside too.

Students as young as 18 months and as old as five years collected food items to be given to the Putnam County Emergency Food Bank.

"We wanted them to learn about the gift of giving. They did a wonderful job," said Juliette January, director of the daycare.

"I don't think you are ever too young to learn to share what you have with others who have less. We had kids as young as 18 months bring in items. It was all the little kids," added January.

The items were delivered to the food pantry Monday.