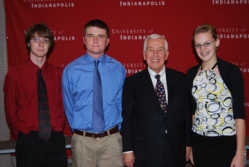 Greencastle junior Josh Bonebrake and North Putnam juniors Cody Beck and Megan Robinson had the chance to meet Sen. Richard Lugar at his annual Symposium for Tomorrow's Leaders on Dec. 12.

Held each year since he has been in the Senate, Lugar opened the Symposium speaking and answering students' questions. He labeled his remarks as "the most important speech I will deliver in my home state of Indiana this year," because "this is potentially the most important audience that I will have an opportunity to think with about how we can make a substantial difference in the history, the life, and the good will of our state in the years to come."

Lugar encouraged students to seriously consider public service and discussed the current economic situation and U.S. foreign policy. Lugar then fielded a variety of questions from the student participants.

"We gather at the University of Indianapolis each year to discuss serious themes because the responsibility for how it all comes out is most likely to lie in generations down the trail rather than in the specific times in which we live," Lugar said. "That is why we bring together two outstanding students from most of the high schools and preparatory schools in our state. They will be leading our communities and businesses, and even our state and country, in the near future and will face many of today's issues."

The award is given by the University of Indianapolis' Lugar Center for Tomorrow's Leaders, the permanent home for Lugar's annual symposium. The center provides extended experiences for high school and college students that expose them to leadership opportunities, the value of leadership in service to others, issues of ethics and integrity in leadership and the qualities of strong leaders.

Building on the university's core values, the center will reinforce the value of a liberal arts education in preparing young people to be tomorrow's leaders.