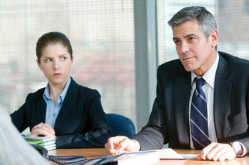 In a year where there were few surprises popping off the silver screen, there were some that were completely unexpected and delightful. The latest George Clooney flick, Up in the Air, is just such a picture.

Amid a society where it's said that 1-in-6 people are unemployed or underemployed, director Jason Reitman delivers a story about a man whose job it is to go to companies, sit their long time employees down and give them the ever so gentle heave-ho as the company goes in "a different direction."

Reitman could be considered one of the better talents coming out of Hollywood today. With flicks such as Thank You for Smoking, Juno, and now Up in the Air, you see a young director who has progressed with each picture and looks to only be getting better.

Ryan Bingham (Clooney) is a man in motion. He spends 322 days a year on the road disposing of employees for bosses who lack the backbone to do so and loves every minute of it. He knows all the ins and outs of travel and slinks through the common travelers, swipes his various cards and enjoys the life he's carved for himself.

Soon his boss Craig Gregory (Jason Bateman) calls Bingham in from the road and informs him that the company is looking to eliminate unnecessary costs and will attempt to replace him with a technique that does it all over the World Wide Web. Essentially, the downsizer got downsized.

As he voices his displeasure with the situation and displays what the system lacks, he is coupled with Natalie Keener (Anna Kendrick) to show her the ropes before he is pulled from the road forever. Add to the mix Alex Goran (Vera Farmiga), Bingham's female equal, with whom he has had an ongoing affair with on the road and that's when the film really gets going.

Along the way, both Bingham and Keener learn from each other and discover they might not be that much different at all. He has also begins to soften his stance on not wanting to settle down as his relationship with Goran continues, but a late night stop by her home puts the skids on that quickly.

In the end, Keener moves on from the company and Bingham is simply trying to move on.

Clooney has never been better. His comparisons to Carey Grant only become more prevalent as he ages. Clooney's top weapon has always been his charm and in Up in the Air, he uses it at every turn. He's also able to mix in some wonderfully venerable moments as well. When he asks to walk his sister down the aisle and when he shows up on Goran's doorstep are some pretty powerful moments.

Farmiga is also very strong. She's able to blend intelligence and sexiness and makes it looks effortless. She's that perfect actress that can make you fall in love with her, rip out your heart and still leave you begging for more.

Then there is Kendrick. Most fans know her from her role as Jessica in the Twilight series. Kendrick is nothing short of amazing in this movie. I was a little worried when I heard she would be going up against the likes of Clooney and Farmiga, but she more than holds her own.

She shares most every scene in the movie with Clooney and sometimes it's hard to tell who the more seasoned pro is. She cute, she's witty and she's flat out good. This was one of my favorite performances of the year. The movie still would have been really good without her, but I feel she's what made the film great. A wonderful performance from an up and coming actress. Her Twilight cast mates should take some notes.

Also check out some cameos from J.K. Simmons, Zach Galifianakis and Sam Elliott.

Final Cut: Up in the Air is a surprising film. Not surprising that it's good, but surprising because of how good it is. With three charming leads, a good story and good direction, Up in the Air will definitely be getting some Oscar talk. One of the best films of the year.

Up in the Air

MPAA Rating: R for language and some sexual content

In theaters now from Paramount Pictures