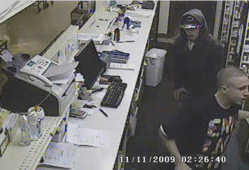 This still photo was extracted from surveillance footage recorded Nov. 11 during a break-in at Cloverdale Drugs.

CLOVERDALE -- Two suspects who broke into Cloverdale Drugs on Nov. 11 are still at large.

Store personnel turned over surveillance tapes recorded during the break-in to the Cloverdale Police Department. While the images of one of the suspects were relatively clear, only a partial view of the other was recorded.

"They were two white males in their early 20s," said Amanda Laney of Cloverdale Drugs.

Laney said the suspects entered through the glass of "a recklessly broken front door."

"One was carrying what appeared to be a black pillowcase," she said. "They both entered the pharmacy area."

Laney said the suspects appeared to be hunting for "something in particular," but said she was not certain what that might have been.

The suspects broke the door with two large rocks, Laney said. An alarm was tripped, and the suspects fled the building within 16 seconds of breaking into it.

Nothing appears to have been taken from the store, Laney said.

"The investigation is ongoing," she said. "We also have fingerprint evaluations pending from the state police."

One of the suspects was wearing a black Eminem T-shirt and appears to have a tattoo on his inner left wrist, Laney said.

"Given that Highway 231 is traveled frequently by regular traffic, if anyone passing by that evening or early morning saw anything suspicious, we're asking them to please let the police know," Laney said.

Anyone with information on the break-in should call Charlie Hallam at the Cloverdale Police Department.