Fleenor building has seen many changes since 1835 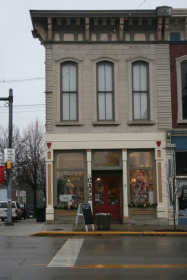 There has been a building standing in the spot where the Fleenor building is now since 1835. Currently Treasures on the Square occupies the bottom floor of the building.
Order this photo

GREENCASTLE -- The spot where the Fleenor Building on the square in Greencastle stands has been a commercial site since 1835 when Captain William Thornburgh built the first brick building there.

He opened a dry goods store in the building, and because he had the only safe in town he acted as a banker, keeping people's money there.

Long after he sold the building and began operating as a lawyer and real estate agent, his building continued to be known as "Thornburgh's Old Stand."

Today, the building is the home of Treasures on the Square, a small restaurant offering a breakfast and lunch menu as well as hand-dipped chocolates and handcrafted items.

The building itself is best known as the place where Eli Lilly opened his first drugstore in 1861. The then unknown pharmacist was about 13 when he moved to Greencastle with his family in 1851. In 1860, Lilly married Emily Lemon, and one year later he opened his modest drug store.

According to "The History of the Fleenor Building" by the Historic Landmarks Foundation of Indiana, the local lore on Lilly is that he abruptly left the store.

"He simply locked his store one day, took the keys to the bank, and went off to war," says the pamphlet.

The truth is that Lilly, like many other Putnam County men, was aroused by the war. Rallies were held almost daily on the courthouse lawn across the street from Lilly's store.

Lilly joined an infantry unit called the Putnam Rifles, but secured permission to raise an artillery company of his own. The company was mustered in service on Aug. 7, 1862 as the 18th Indiana Battery, Lilly's Light Artillery. The group saw service at Hoover's Gap and Chickamauga.

Lilly never returned to Putnam County, but members of his family kept the drugstore open for some time after his departure to the war. In 1863, the stock was sold to J.B. McCormick and the Thornburgh building was sold to Levi Cohn, who played an important role in the history of the building as he tore down the original structure and replaced it with the building that now stands.

Cohn owned his new building for a mere six years. He sold it to local grocers Hutchings and Darnall in 1871. They owned it for only one year and sold it to the Farmers Bank.

In 1873, there was a financial panic and cycle of depression lasting five years, and the Farmers Bank failed early in 1874.

The first floor remained empty, but in 1874 the Star newspaper began publication on the second floor.

The city was just recovering from a devastating fire in 1874 that destroyed much of the east side of the square. In March 1875, another fire broke out in Sherfy's furniture store across the alley from the bank.

The corner building was saved, although it was badly damaged. The presses of the Star on the second floor crashed through all the way to the basement, according to a local newspaper account.

John C. Albin purchased the badly damaged building and the adjoining parcels to the west. It is believed the buildings were completed between 1877 and 1880.

James Furgeson bought the building in 1877 for $2,400; he sold it three months later to John Ketchum for $5,000, and just four months after that the building was purchased by Alexander Stevenson for $8,000.

Stevenson and Ketcham completed the work of repairing the building.

In Nov. 1901, the ground floor of the building was leased it to Bence, Renick and Gauthier, owners of the Owl Drug Store. From that date on the building continuously housed a drugstore until 1982.

John Dunlavy bought the building in 1907. He leased it to the Owl Drug Store until 1912 when he opened his own drugstore. His store remained there even after he sold the building to J.P. Allen in 1925.

In 1928, Audrid Fleener purchased the drugstore business. He continued to operate the drug store there until 1981 when the Heritage Preservation Society of Putnam County purchased the building. They opened their office in the back of the building.

This was a period of time during the start up of Main Street Greencastle and the Development Center. There was a thriving downtown merchants association and many downtown activities.

"For nearly 60 years the corner has been identified in the minds of Greencastle residents with Fleenor's drugstore, where countless children bought their ice cream and cherry cokes at the old-fashioned fountain and where downtown businessmen met regularly twice a day for coffee and conversation," says the Historic Landmarks brochure.

HPS sold the building to its current owner Rex Call. The first tenant in the building was Anne Clark's upscale Fashion Corner.

In 2007, Lynda Dunbar moved her store from a tiny spot called "The Cellar" on West Walnut Street to the Fleenor building.

She repainted, added lights and wallpaper as well as her special decorating touch and Treasures on the Square was born. In addition to her line of candies and handmade items, she serves breakfast and lunch and offers an old fashioned soda fountain reminiscent of the old Fleenor days.

Treasures on the Square is currently the only tenant in the old Fleenor building.