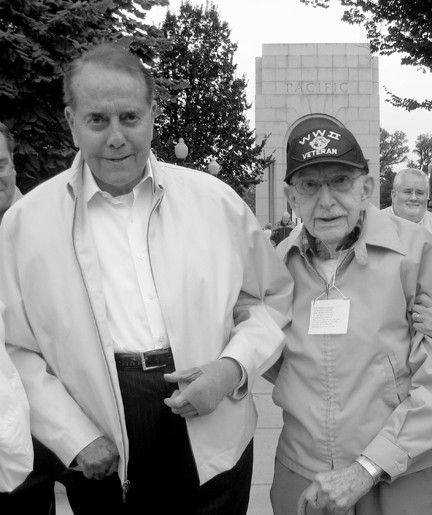 GREENCASTLE -- Had it not been for a program known as Honor Flight Network, Al Erpelding may never have had the chance to visit Washington, D.C. to see the memorial there commemorating his and his comrades' service in World War II.

Erpelding, who has lived in Greencastle for more than 50 years, received a free flight to the memorial this past fall. His daughter Anne Wood accompanied him.

"It was a real nice thing for my dad and me to share," Wood said.

Erpelding was humbled by the experience.

"A lot of people came up to shake my hand, congratulate me and thank me for my service to the country," he said. "I was kind of embarrassed, really. I wasn't expecting anything like that. It's been a long time since the war's been over."

Wood saw a show about Honor Flight on PBS, and began considering making arrangements for her father to go to Washington through the program.

"I thought, 'Wow, is that cool,'" she said. "It took such a long time for the memorial to be built, and I thought it was really a wonderful thing that so many veterans would actually be able to see it."

Honor Flight Network is s non-profit organization that arranges for the free transportation of veterans to Washington, D.C. so they can see the memorials for the wars in which they fought.

Honor Flight was launched in the spring of 2005 when six small planes carrying 12 World War II veterans took off from Springfield, Ohio bound for the WWII Memorial, which had just been completed in Washington, D.C. in May 2004.

By August 2005, the waiting list of veterans who wanted to take an Honor Flight to Washington became so extensive that the organization began partnering with commercial airlines to transport veterans.

The organization was founded by Earl Morse, a retired Air Force captain who went on to work as a physician's assistant for the Department of Veteran's Affairs.

Morse would often speak to his patients about whether or not they would be able to get to Washington to visit the WWII Memorial. He found that for most, financial or physical obstacles made the trips impossible.

Morse was a private pilot, and in 2004 he asked one of his patients if he could fly him to Washington, free of charge, to visit the WWII Memorial.

The veteran's emotional reaction and acceptance of Morse's offer was the seed from which Honor Flight took root and sprouted. Eventually, Morse asked for help from other pilots to take more veterans to Washington. By 2006, Honor Flight was exclusively using commercial flights to transport veterans.

Erpelding was a recipient of the Bronze Star. The unit he served with liberated more than 110,000 allied prisoners of war in Moosburg, Germany, and went on to free the prisoners at more than 20 prisoner of war camps.

"A special moment on the Honor Flight trip was an unexpected meeting with another veteran who had been a POW at Moosburg." Wood said. "When the (Erpelding) and the POW met at the WWII monument they embraced. The POW, with tears in his eyes, said, 'Thank you, thank you' some 65 years after the fact."

Erpelding went to D.C. with a group of 80 other veterans. They flew out of Columbus, Ohio.

As an added bonus, Erpelding and his traveling companions met U.S. Senators Bob and Elizabeth Dole.

"(Erpelding) was greeted and thanked by many visitors to the Memorial for his service as a Staff Sergeant in charge of radio communications for the 47th Tank Battalion," Wood said.

Erpelding worked for IBM for many years. He moved to Greencastle in 1953 when IBM opened, and retired from the company in the late 1980s after 45 years of service.

On its first year of existence, Honor Flight transported 137 veterans to Washington. By 2008, that number had climbed to 11,137. This past year, nearly 25,000 veterans were able to view their memorials because of Honor Flight.

Honor Flight is funded solely by donations, but the organization does not accept any donations from veterans. Fraternal organizations such as American Legions, VFW posts, Am Vets and the DAV often contribute to Honor Flight.

Based on 2008 statistics, about 1,000 World War II veterans in the United States die each day. Because time is of the essence, Honor Flight gives priority to WWII and terminally ill veterans. In the future, it is hoped that tours for veterans of the Korean Conflict and then Vietnam War can be added to the organization's schedule.

For more information about the Honor Flight Network or about scheduled memorial tours, visit www.honorflight.org.