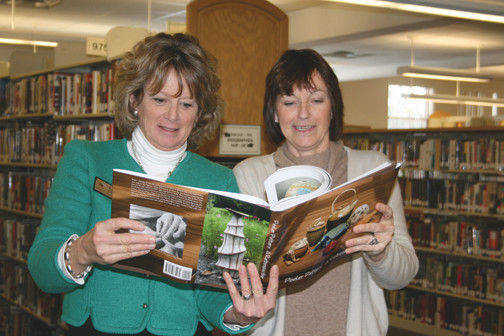 Anyone who loves pottery knows about Richard and Marj Peeler, local artists who have produced hundreds of art pieces.

The Putnam County Museum recently published a book about the couples work titled "Peeler Pottery; A Retrospective" and have donated a copy of the book to the library.

The library also purchased a copy of the new book for their History Collection of Local Artists. One book will remain as a reference book in the library and the second one is available for loan to library patrons.

The book documents the beauty and diversity of the Peelers' artistic creations with 756 color photographs. The couples' pottery is the main focus but the book also includes sculptures, woodturnings and fabric and gourd art by the couple.

According to Putnam County Museum Director Anne Lovold more than 75 books have been sold by the museum.

"We ordered 300 hard copies and 800 soft copies and they are going fast," said Lovold.

Hardbound copies may be purchased from the Museum for $75 and soft cover books are $40.

The 342-page book tells the story of Richard and Marj Peeler from their meeting in 1941 as art students at Indianapolis Arsenal Tech High School through their college and courting years and the building of their self-constructed rammed earth home in southern Putnam County. It continues with the story of Richard's tenure on the art faculty at DePauw University, where the Peeler Art Center is named in his honor.

In 1972, Richard retired from DePauw, and, together with Marj, opened Peeler Pottery, a production studio they built in their backyard. They worked as a team producing utilitarian and artistic pottery until Richard's death in 1996.

The book may be purchased at the museum, ordered by phone at 653-8419, by email at museum@co.putnam.in.us or through their Web site www.putnamcountymuseum.org.