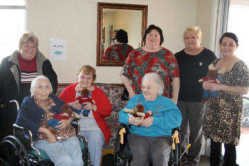 GREENCASTLE -- Maurica Anderson was visiting Geraldine Frasier at The Waters nursing home last fall when Frasier mentioned wanting to have one of the organization's Tommy Moose stuffed animals.

The Tommy Moose is a soft, cuddly stuffed moose dressed in a red sweater with the name "Tommy" embroidered across the front. They are given to emergency responders by the Moose Lodges to help break the ice with children in emergency situations.

Anderson told her fellow Women of the Moose members about Frasier's request and community service chairman Vickie Ross and chaplain Geri Cutright got to work raising funds to purchase some of the stuffed moose.

They raised money at their Thanksgiving dinner, raffled off items and held a 50/50 raffle.

The group purchased 12 Tommy Moose animals and presented six to members at The Waters and six to residents at Mill Pond.

Frasier, who is a 43-year member of the organization, got her Tommy Moose, as did fellow Women of the Moose members and Waters residents Marjorie Owens and Wanda Harvey.

"I thought, if we can give them to kids why can't we give them to older people too," said Anderson, who happened to be celebrating her second year anniversary with the Moose organization on the day of the presentation.

For information about the Tommy Moose program call the Greencastle Moose Family Lodge at 653-5456 or visit their Web site at www.greencastlemoose.org