'Winter Warmup' in the forecast for classical musical festival 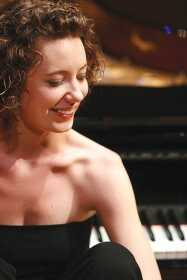 The Greencastle Summer Classical Music Festival is presenting two "Midwinter Warmup" concerts, one on Sunday and one on Jan. 24. Both will begin at 3 p.m. and will take place in the sanctuary of Gobin United Memorial Church in Greencastle.

Admission is free, with donations accepted to raise money for the 2010 summer series. All performers are donating their services.

"The summer festival has turned out to be an important part of the cultural life of Greencastle," said Eric Edberg, DePauw cello professor and the artistic director of the series. "With DePauw not in session, there isn't much to do during the summer, especially when it comes to classical music. Many people have told us how much the series means to them. We realized that the same situation exists during January winter term -- virtually no music events. So we are putting on two 'Midwinter Warmup' concerts this month."

On Sunday, pianist Stephanie Gurga, a DePauw School of Music alumna, will be featured in an all-Rachmaninov program. Gurga will perform seven preludes and the "Etude-Tableaux in D Major, Op. 39" for solo piano. After an intermission she'll be joined by Edberg for the "Sonata for Cello and Piano" in a performance dedicated to the memory of Hugo Edberg, Eric's father, who passed away on Jan. 8.

Japanese pianist Nariaki Sugiura and Korean cellist Yeon-Ji Yun are organizing the Jan. 24 program, "Music from Around the World", which will include Russian violinist Matvey Lapin and pianist Katya Kramer, as well as soprano Barbara Parť and pianist John Clodfelter. Works from Asia, Russia, Eastern Europe, Latin America, and North America will be included.

Gurga performs frequently across Europe and the United States, specializing in historical keyboard performance and the translation of historical musical works onto modern instruments. An artist on piano, harpsichord, organ, and fortepiano, she appears in concert as soloist, accompanist, chamber musician, as well as choral conductor, covering a diverse repertoire from the early baroque through extremely contemporary composition.

In recent seasons she has performed in the Ritratti Festival (Monopoli, Italy), the Acadťmie Internationale de Musique (Flaine, France), and the Duo Violin/Piano Academy of Lausanne (Switzerland), where her performance of the Poulenc Violin Sonata was recorded and is broadcast by the National Swiss Radio.

She has developed a special reputation for her distinct interpretations of the baroque and early classical repertoire on the modern piano, integrating early performance techniques such as improvisation into her performances. Her recording of the Jacques Duphly harpsichord works on the modern piano is the first of such to appear, and she continues to experiment with bringing many forgotten and over-looked musical jewels to light in the modern keyboard repertoire.

As a modern pianist, Stephanie won the second prize in the 2004 International Music Competition of Flaine, France. Recently she was featured as soloist in performances of the Bach concertos for multiple harpsichords and orchestra, in the Mozart "Concerto in E-flat Major K. 449," and in collaboration with tenor Florian Cramer in a series of recitals of Mendelssohn lieder. In 2009 she was invited to hold a 10-day piano workshop for talented young pianists in Prestbury, England.