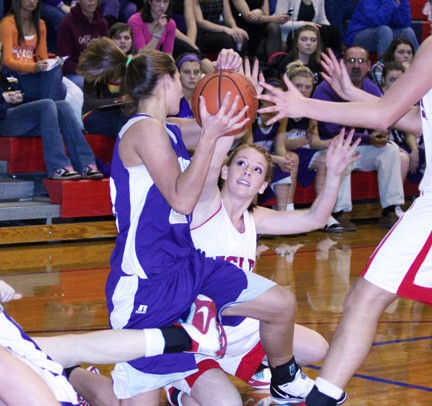 GREENCASTLE -- Both teams were coming off loses earlier in the week, but both came out attacking and it was Greencastle outlasting South Putnam 61-55 Friday. The win moves GHS to 8-6 on the season, while the Eagles drop to 2-12.

The Tiger Cubs and Eagles both came out scraping, diving after loose balls and applying some up-in-your-face defense, which resulted in some heated Friday night combat.

The contest was an evenly matched battle, with Greencastle jumping out to a quick lead and sustaining it into the half, leading 31-26 at the break.

South Putnam head coach Debbie Steffy was pleased with the 180 her team pulled from their contest against Riverton Parke Wednesday. The Eagles took to the court with something to prove and they achieved that.

"It was like two different basketball teams, the one that played on Wednesday night and the one that played tonight," Steffy commented. "There was good effort out there. We did some things well, we had our mistakes here and there and they went through a run there in the third quarter. First of all, at the end of the first half, they got an easy basket on us and then we came out in the third quarter and scored and got it back."

The Tiger Cubs won the game by five and they got their cushion in the third quarter.

Mallory Miller scored seven points in the first half and surpassed that tally in the third quarter after connecting on two bombs from long range and a two-pointer. With her lift, GHS outscored the Eagles 15-11 and extended their lead to 46-37 heading into the fourth quarter.

South Putnam closed the gap late to five points, but the Tiger Cubs were able to convert their free throws when it counted and came away with the six-point win.

Miller led GHS with 15 points, followed by Chelsea Samuels with 11 and Burgeson with eight. In addition to Dabkowski's 18, Brooke Boetjer and Jessica Thompson also scored in double figures for South Putnam, putting up 13 and 10 points, respectively.

Greencastle will host Cascade Friday, while the Eagles will travel to Eminence Monday for a 6 p.m. tip.

Next game -- Greencastle will host Cascade Friday, while the Eagles will travel to Eminence Monday for a 6 p.m. tip.