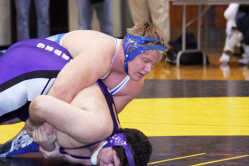 AVON -- Months of preparation led area wrestlers to Avon Saturday for the 2010 Avon Wrestling Sectional for a chance to compete for a state title. Of the county competitors, 12 grapplers will make the journey to Mooresville Saturday to battle at the regional.

Greencastle was Putnam County's top finisher in fifth place with 131 points, followed by North Putnam in eighth with 59 points and Cloverdale was ninth with 54 points. South Putnam was 10th on the day with 36 points.

The Tiger Cubs placed the highest, but were the only team to finish the day without a sectional champion. Advancing out of the sectional for GHS are second-place finishers Nick Pingleton (103), Jesse Vermillion (160) and Jesse Ford (171), third-place finisher Kody Collins (119) and fourth-place finishers Tyler Hudson (130), Nikko Hayden (215) and Will Mobley (285).

Although he was a little hoarse following the matches, GHS head coach Matt McComish was feeling good. He has wrestlers moving on and he hopes that their march will continue past next weekend.

"Not a bad day," he said smiling. "We got seven through. I wish that we could have got more, but you know, we're always going to look at it and wish we got everybody through, so that's always a goal. But, seven through is an improvement from last year, it's one more, and hopefully we'll just keep getting better. We sent three to semi-state last year and hopefully we can improve on that." 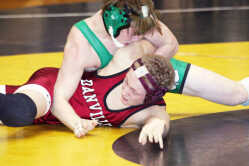 North Putnam will be represented by 103 champion Tyler Ruble and fourth-place finisher Keegan Foltz. The Cougars brought a small team, but were able to show some fight. Even though they had a nice showing, head coach Kenny Kerns expressed his frustration after the matches.

However, Kerns was pleased with his lone champion at 103. Ruble defeated Greencastle's Pingleton for the title to make a leap from last year.

"He (Ruble) was fourth place last year to champion this year," Kerns said. "Keegan Foltz is going. It's the first time he went to regional. Of course, we have like three alternates I think; in case anyone gets hurt they could go. It means we've got another week of practice. We'll go at it and hit it hard.

"I just get so aggravated. We wrestled well the last couple times we've wrestled," he added.

Heading to Mooresville for Cloverdale will be 145 champion Donnie Helterbrand and fourth-place finisher Matt Hall at 189. 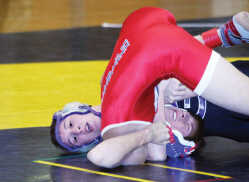 Helterbrand was featured in one of the most exciting championship matches of the day. He battled Danville's David Haak in the final match and took the Warrior to overtime. After essentially being proclaimed to be gassed by the opposing coach, Helterbrand dug deep and took his apparently fresher opponent to the mat, earning two points and the win in the overtime period.

"Yeah, overall not bad," he said. "We came out and tried hard and did their best. We got one champion out of the day, so that was great. It's a testament to his hard work.

"For a pretty young team, I felt we wrestled pretty well. Some of these kids haven't even seen the sectional, so coming to the big school of Avon, four mats, big teams, it's a whole new experience for some of them. It's only the second year for a couple. They responded pretty well and wrestled hard," he said.

Hendrickson acknowledged the fact that the win will improve Hurst's draw going into regional. Plus, he'll have a nice group to help prepare Hurst for the regional. 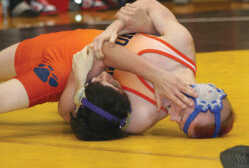 "It's good that he won so he'll be the No. 1 seed, so going in it will help in the bracket for the regional," Hendrickson commented. "It's a little tougher competition in the regional, I kind of looked ahead a little bit, but we're up for it. Another hard week of practice -- we got a lot of bodies to help now and focus on the on. We're looking forward to it -- I can't wait."

Practice was also on the mind of Greencastle's McComish. He said it's going to be the fundamentals that got them to Saturday's sectional that will propel through regional.

"It's always technique and a lot of conditioning," he said. "It's going to be a difficult week for us, we're going to have to see our draws and get ready for them, win that first match and make sure we get to semi-state and place as high as we can."

Advancing wrestlers will compete at the Mooresville Regional Saturday at 9 a.m.

Next game -- Advancing wreslters will compete at the Mooresville Regional Saturday at 9 a.m.