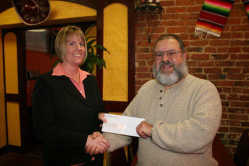 There are numerous charities worth supporting, but it is hard to find one organization that touches as many lives in Putnam County as the United Way.

As the campaign ends for the year, Executive Director David English reports a total as of January 28 of $149,645.

He attributes the lower amount to a reduction in individual contributions as well as fewer funds from several businesses and organizations because of lay-offs, employment freezes and the general economy.

"Individual contributions were between 15 and 20 percent lower this year. Even if we'd gotten part of that amount, we would have been close to our $175,000 goal," noted English.

On a more positive note, English noted that several local businesses had increased their donations.

"Management people at Buzzi Unicem stepped up and made sure their employees knew they were donating. These are all good solid hardworking people who stood up and gave," said English.

Teacher's Credit Union is another organization that increased their donations.

"We've been donating to the United Way for years and years," explained Manager Barb Lage. "We're very happy to be able to contribute to this community."

Vectren employee contributions were up 168 percent over last year.

"That's a fantastic thing that directly impacts the lives of so many people right here in Putnam County," said English.

"The fact is that about 98 percent of money raised in this county, stays here," says English who is proud that the community raised as much money this year as last.

"Despite being short of our goal, we did equal last year's goal. We are fortunate to have so many people and organization support us," he said.

As the economy worsens and people tighten their belts, the demand for United Way Agency services continues to rise.

"Our county social service agencies will feel the financial crunch created by the economic uncertainties, and will need our help more so now than at times of prosperity," commented English.

These same agencies are facing cuts from federal and state funding programs and are relying on the generosity of the community in which they operate.

Another concern with fewer funds for these organizations deals with economic development in the area.

"The county is struggling to bring new business in. One of the things business people look at is what community services are offered. So this campaign may have a bigger impact," explained English.

"Now it is time to turn our eyes to the future, If anyone has a question about the operation of the United Way, a desire to volunteer, donate or establish an ongoing contribution through the Putnam County Foundation's various giving programs, come see us," added English.

English encourages employers and individuals to call the United Way of Putnam County to discuss where funding goes and how it helps the entire community.

"A huge thank you goes out to all those who helped with this year's campaign," said English. "You have helped us change lives, shape our community and work collectively to create a healthier and more caring community. I am very grateful."

There are also several major event sponsors who contribute to the campaign with in-kind donations. These include: DePauw University, Area 30, the Banner Graphic, Shuee and Sons, Old Hickory Golf Course, the Walden Inn and conference center and Duke Energy.

Donations can still be made by calling 653-5638 or by mailing them to the United Way of Putnam County at 2 S. Jackson Street, Greencastle.