Heeke is Chamber's Citizen of the Year 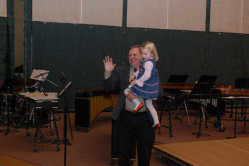 Ken Heeke shares a moment with granddaughter Isabella after being named the Greater Greencastle Chamber of Commerce Citizen of the Year on Saturday.
Order this photo

GREENCASTLE -- While he is admired by many in the community, some of Ken Heeke's biggest fans are his children and grandchildren.

When Heeke was announced as the Greater Greencastle Chamber of Commerce's Citizen of the Year on Saturday, his toddler granddaughter was the first to wrap him in a congratulatory hug.

"While we realize that this nomination would be mostly based on our dad's involvement in the community, we would also like to try and explain the type of father our dad has been," a letter submitted to the chamber by Heeke's children said. "While always busy with his civic activities, Dad still made it to every soccer game, swim meet, track meet, choir concert, band concert, horse show and awards event possible. When they needed help, Dad ran the timing system at swim meets. When his son fell in love with history, Dad started Civil War reenacting. When his wife and daughter fell in love with horses, Dad joined the Putnam County Saddle Club and served on the board for many years. He has truly been the world's best dad."

Heeke was recognized at the chamber's annual dinner, which was held at the DePauw University Tennis & Track Center. Incoming 2010 chamber President Laurie Robertson Hardwick presented Heeke with his award.

"This year we had several outstanding nominations," Hardwick said. "Unfortunately, we could only choose one.

"One of the nominators wrapped it up when he said, 'Many past winners have been honored for a lifetime of local achievement.'" Hardwick continued. "'Several have been cited in more timely fashion for a significant contribution or accomplishment during the previous calendar year. Still others have made a brief but lasting impression upon this community. But few, if any, can match the length and breadth of the community involvement dominating the resume of the person I believe to be best suited to be named the 2009 Citizen of the Year."

Heeke has lived in Greencastle since 1980. He and his wife of more than 30 years, Joyce, have three children, Laurie, Shawn and Tiffany. The Heekes have two granddaughters, Isabella and Jillian.

"You know, everybody who has ever received this award will tell you it's not just one person who does anything," Heeke said. "It's the team; it's everyone who gets behind you. I love Greencastle. I'm so proud to be here."

Hardwick spoke of her personal admiration for Heeke.

"Congratulations, Ken," she said. "It is my sincere privilege to give you this award."

Hardwick noted that two past Chamber Citizens of the Year -- Dr. Donald Brattain and Bobby Albright -- had passed away in 2009.

"Both will be missed very much," Hardwick said.

"He has given his efforts tirelessly," Doan said.

The other award, Director of the Year, went to Beau Battin.

"He has proved to be a wonderful ambassador for the chamber," Doan said. "He is always there at the drop of a hat when the organization needs him."

After presenting Welker and Battin with their awards, Doan turned the reins of the chamber over to Hardwick.

"It's easy to become very passionate and possessive of this office," Doan said. "But (Hardwick) is someone I respect and admire, and someone I know loves Greencastle. There is not another person I know who wants to see this city move forward and prosper as much as she does."

Hardwick lauded Doan's efforts to "reach out to DePauw students" and "bridge the gap" between the college and the Greencastle community.

"We've had the collaboration of so many groups," Hardwick said. "We've got a great synergy going on in our community."

Hardwick said economic struggles would make it necessary for the chamber to "be more creative" in finding ways to continue to help the Greencastle community move forward. She said one of the main focuses for her would be marketing the chamber, both externally and internally.

She said she would also continue to develop the chamber's Buy Local program.

"In my opinion, we've only scratched the surface," she said. "We are all a part of this community and we should all invest in it. We have the people, we have the synergies and we have the partnerships."