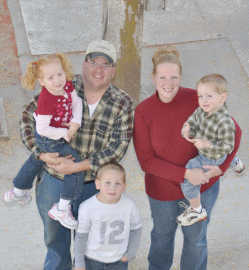 Joe and Angela Mann were the 2009 winners of the Indiana Farm Bureau Young Farmer Achievement Award. They are pictured with their three children, from left, Emily, Brady and Nathan. (Indiana Farm Bureau/KATHLEEN DUTRO)

CLOVERDALE -- For Joe and Angela Mann, farming is the family business. Joe farms with his father Fred and two older brothers Rob and Chris.

It appears winning is also part of the family business. When Joe and Angela were named the Indiana Farm Bureau Young Farmer Achievement Award winners back in November, Joe became the third Mann brother to be so honored.

"That's another big feather in my parents' cap that they've had three sons that have been able to come back to the farm and win this award. I think that's pretty incredible, really."

Joe and Angela didn't stop there, though. Winning the 2009 award also made them eligible to attend the American Farm Bureau Federation's 91st annual meeting last month in Seattle.

Among the 33 state winners at the convention, they were selected as part of the top 10, which meant a bit more competition.

"We got out there and found out we were in the top 10 and we were interviewed," Joe said. "Then they took the top 5 and you had your winner, and they got a Dodge truck. Then the next four runners-up all got a tractor from Case IH -- a 30-horsepower utility tractor. It's still a really nice prize.

"We don't know if we were fifth, fourth, third or second, but it doesn't really matter," he added.

Interviews and winning tractors weren't the only benefit of the Seattle trip, though. The Manns agree it was a great time for networking and learning about the different types of farming one finds throughout the United States.

"It's not necessarily row crops, it's not just grains," Angela said. "We were against berry producers ..."

"... fruit and vegetable producers from Arkansas," Joe chimed in, "a winery owner in Connecticut was one of the finalists. And then on the flip side, you had a couple from Utah that farmed a huge operation that went into Idaho.

"You had a diverse cross-section. It was interesting to talk with them, visit with them and find out things are different in different parts of the country."

Some of the differences were shocking.

"The guy from Connecticut, for instance, I asked him what farm land was worth out there, and he said $250,000 an acre," Joe said.

"And we thought our land values were high," Angela added with a laugh."

"We're a bargain. We're a steal," Joe said. "But, Connecticut, that's basically a bedroom community for New York City. Urban sprawl -- things talk about here -- he's living right amongst it, so it was interesting to talk to him about how they deal with it."

It was quite an experience for "a born and bred Cloverdale boy" and his wife who grew up on a dairy farm in Seymour. For observers used to a more "traditional" Midwestern farming experience, the Manns' operation will seem much more familiar than a Connecticut winery.

"It's something I can do and stay home," Angela said. "It's a seasonal business. We run retail out the public April through June and we've started fall sales between August, September and October. We had to start in August this year because it was so quick -- fall came way too fast."

The seasonal nature of the greenhouse also gives Angela the chance to spend plenty of time with their three children, Brady, 6, Emily, 4, and Nathan, 2.

"We're into the raising kid business right now," she said.

The couple met while they were both studying agriculture at Purdue -- Angela was studying animal science and Joe was in agricultural economics.

After college, Joe was finally ready to join the family business.

"My father always made it clear to me that I had to have a college education to come back and farm. He didn't care if it was Purdue, IU, ISU, but my parents always instilled in us the importance of education," Joe said.

Being the youngest in the family, Joe has not only watched his older brothers win this award before him, he's also seen the model of leadership come from his parents on down. While the award may be great, it's the involvement that contributed to winning it that really matters.

The involvement has included activity with their church and with the Farm Bureau at the local and state level. Joe is also on the County Plan Commission for zoning, while Angela is involved with the children's activities for Ag Week, which is coming up in March.

"People figure out you're a sucker, and then it slowly starts snowballing," Joe said with a laugh.

One thing the application process and the award itself has done for the couple is give them a chance to reflect on a decade of farming and marriage. Joe mentions the chance it has given him to look at the "young" portion of his career and how fortunate he and his family are to be involved in agriculture.

"It's like a capstone achievement of your young farming career. We're quickly becoming -- we're not young," Joe laughs. "I think when you do this application, you kind of look back and it's happened fast, but you really look back and start thinking about things."

What he continues to return to is how good it is to be self-employed in a business where there is always demand.

"Farmers like to sit around and tell everybody how tough we've got it. You know, it's so hard," he said. "But the greenhouse business was terrifying when we first started. I mean, 'What is going to make people come in here and buy anything?' In farming, I can always take something somewhere and sell it. Somebody will buy it. You may not like the price you get, but they'll take it."

With their "young farmer" era coming to a close, the Manns turn their attention to future goals: slowly growing the greenhouse, maintaining the stability of the family farm and perhaps preparing the way for the next generation of farmers.

"I think the business is definitely big enough to hand to any of (the kids) if they have the interest to come back," Joe said. "That's always kind of been our goal, to make sure they have an opportunity if they desire."