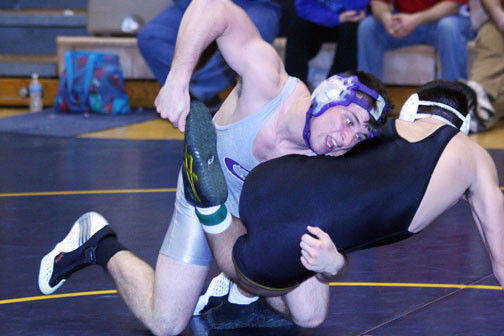 Greencastle's Jesse Ford earned the right to compete at the Evansville Wrestling Semi-State after placing second at the Mooresville Regional Saturday.

MOORESVILLE -- Four county wrestlers battled their way to the semi-state Saturday at the Mooresville Regional. The competition was hot on a day where snow blanketed central Indiana.

Of the 10 wrestlers entered, two second-place, one third-place and one fourth place finishers will represent Putnam County.

Greencastle wrestlers Jesse Vermillion and Jesse Ford will travel south in hopes of making it to the state finals in Indianapolis.

Ford (171) finished the day in second place after winning decisions over Greenwood's Alex Wassman and Martinsville's Jacob Underwood. The final turned out to be déjŕ vu for Ford as he fell to Avon's Cole Brandt -- the same opponent the lost to in the sectional finals.

Vermillion (160), a third-place finisher on the day, began his effort by pinning Center Grove's Brock Warner, but was defeated by Indian Creek's Trey Reese in his next match. Vermillion was able to rebound and outlast Cascade's Cody Blackburn for third place, winning 2-1.

South Putnam brought their lone qualifier to Mooresville and he didn't disappoint. Chris Hurst ripped his way through the heavyweight division, pinning Center Grove's Drew Ponder in his first match, and then earning the victory in an overtime thriller against Indian Creek's Jake Stevenson.

In the finals, Hurst was pinned by Whiteland's Zack Vandeman to earn his second-place finish.

"It was a pretty good day for Chris," Eagle head coach Josh Hendrickson said. "Two good matches, the second match was really good, an overtime victory. That was a great match. The last match against Whiteland, that's one of the predominant systems in the state and has been for a long time. Whatever seed you're going to wrestle from there, you know they're going to be good. But he did well -- I'm proud of him."

In his overtime match, Hurst's opponent scored a single point in the first 30-second segment, but it was Hurst that would have the final word. Hurst performed a reversal to earn two points and the win -- a move that impressed his coach.

"It was a great move too -- the switch. Right at the end of the second overtime period," Hendrickson commented.

Now they will set their sights on Evansville and what they hope will be a productive outing. Henrickson likes his wrestler's odds.

"It feels pretty good. I got to give credit to Chris. He's been wrestling since he was four probably. He's put a lot into it and he deserves it. Hopefully he does well next week. I think he's got a good chance," he said.

Cloverdale brought two regional qualifiers to Mooresville, but lady luck wasn't on the Clovers side as both wrestlers fell in their first-round matches.

Donnie Helterbrand lost a heartbreaking match against Franklin's D.J. Dickinson to begin the day. Helterbrand got down early, but was able to battle his way back within a point. Unfortunately, time ran out and Helterbrand's quest for semi-state fell short.

"He was in control of the match, we were doing what we needed to do -- the last minute of the match, just one little mistake and at this level, one mistake is all it takes," Cloverdale head coach Steve Livingson said. "He gave up a near-fall and did a great job not getting pinned and then ended up losing by one point, which is a heartbreaking. That's two years in a row for him. It burned him pretty good last year, I saw a great improvement this year, but he also put on weight and was in a bigger weight class.

"I know there's going to be guys wrestling next weekend down in the Evansville Semi-State he can beat. But it's just unfortunate he came out a little flat and one mistake is what kept him out of it," he added.

Also making the journey for Cloverdale was Matt Hall at 189. Hall entered the day after missing two days of school sick, but fought with every ounce of his being.

Hall had prepped all week for Indian Creek's No. 1 wrestler, but found out after arriving at the regional he would be facing another opponent due to injury.

Although the opponent was different, Livingston thought his wrestler fought with a lot of heart to battle through his illness.

"He wouldn't have come today if he didn't think he wasn't going to win," he said. "It kind of speaks to his character and the character that our team has carried all year. Matt didn't go to school Thursday or Friday, he's been home sick and his Dad actually took him right after his match to the hospital to get him checked out again. He got sick on the mat, he gutted it out and he had it in his mind that he thought he was going to win.

"He could have taken the easy way out and just stayed home and been sick, but he got up out of bed for a reason this morning. He didn't get up to lose regardless of who he had to wrestle and how sick he was. He got up and came here because he thought he had a chance to win," Livingston concluded.

Advancing wrestlers will compete at the Evansville wrestling semi-state Saturday at 9 a.m.

Next match -- Advancing wrestlers will compete at the Evansville wrestling semi-state Saturday at 9 a.m.