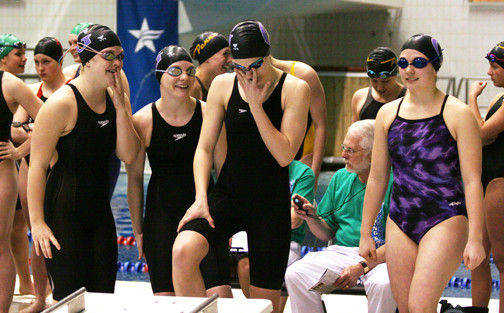 GREENCASTLE -- As the Carmels of the world shoot for state supremacy, for most swimmers the state meet itself is a goal. The chance to swim in a pool where Olympic and world champions have competed is the season's reward.

So it was Friday at IUPUI Natatorium for Greencastle's Melissa Ball, Sydney Terry, Melanie Bittles and Natasha Aring. The season ended for the Lady Tiger Sharks, but the experience alone is a crowning achievement.

"It's awesome. They're thrilled to be here; they're having fun," coach Luke Beasley said. "We're enjoying the experience and taking it all in."

Ball had higher goals. Seeded 12th in the 50 freestyle and 100 butterfly, her chances of making it to today's finals looked good.

Unfortunately, she had her second-fastest day in the pool, not quite matching last week's sectional.

"Sometimes swimming's a sport where you miss by a little and on the scoreboard it looks like a lot," Beasley said. "It just didn't quite go our way."

"Both of those swims were still the second fastest she's ever swam in her life," the coach said. "She has a lot to be proud of -- swimming at the state meet in two individual events."

For the 200 freestyle relay, the outlook was slightly different. The team of Ball, Bittles, Terry and Aring was seeded 32nd. While advancing was a long shot, they had the chance to perform in the biggest relay of their lives.

"I couldn't be prouder of them for being here. They earned it," Beasley said. "We want them to enjoy the experience, not be intimidated by it."

Friday was the last high school meet for Aring and Ball. For juniors Bittles and Terry, it was a taste of the state meet and something to shoot for next year.

"What's still a little bit of a battle for us is treating state with a little more of a priority than sectional. It's difficult for a small program like us, but we're getting there," he said.

He also has lofty goals for Ball.

"Melissa's an absolute stud," Beasley said. "She (advanced to state) off three month's work. Now if we can just get her to swim at the University of Evansville next year, I think she could really unleash her true potential -- which would probably shock her -- if she committed some more time to it.

"She's had one of the best careers ever at Greencastle High School," he concluded.