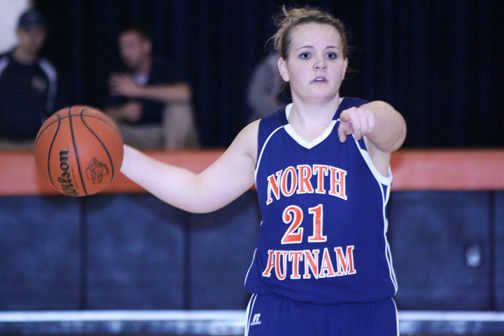 North Putnam senior Dakota Malayer directs the Cougar offense during the first half of their game against Tri-West Friday. The Bruins won the contest 40-28.

ROACHDALE -- For a half, North Putnam had Tri-West wondering if an upset was in the making at the North Putnam Class 2A sectional. But a rough third quarter gave the Bruins all the cushion they would need as they defeated the Cougars 40-28.

"I thought we really stayed in and battled. We went in with a game plan of how we wanted to attack them and we did that. We missed a couple of shots, that if they dropped in the first half, we're right there even with them at halftime," Cougar head coach Jim Brothers said.

The Cougars came out and applied some tough defensive pressure to a Tri-West team that seemed to be caught somewhat off guard and used that momentum to get their offense working as well.

Megan Robinson connected on two buckets, while senior Carlye McGaughey ripped the net from behind the arc. North Putnam found themselves down 15-7 after one and stayed even with the Bruins to enter the half down 20-12.

Then came the third quarter of play.

Having shown they were more than up for the challenge of Tri-West presented for the opening half, North Putnam came out flat in the third quarter and was outscored 17-2 to give the Bruins a hefty lead. Up to that moment, North Putnam was able to hold the high-powered Bruin offense in check and that was the plan coming into Friday according to Brothers.

"Defensively, I thought our kids played very well," he said. "There was one stretch in the third quarter that they took a little run on us and got out that we couldn't stop. We stopped all the other runs. That was a key going in, we didn't want them to go on six or eight point runs and in the third quarter, I'm not sure what the run was, but we scored the first two points of the third quarter and then they scored whatever they got in that quarter. That was the difference."

The Cougars entered the fourth quarter trailing 37-14, but found it in themselves to put together a final push to make things interesting.

McGaughey connected on two more three-pointers, with Robinson added one of her own to help power an offense that outscored the Bruins 14-3 in the final stanza before ultimately falling 40-28.

Knowing his team needed a lift, Brothers impressed on his squad they look to one of their seniors to lead the way.

"I suggested we find No. 25 (McGaughey) and Carlye hit some big shots," he acknowledged. "Our team has been this way all along, when one shot drops, the next one's gonna drop -- we just struggled to get that first one to drop. Carlye hit a couple threes, then Megan (Robinson) got a three and all of a sudden we're back, instead of being down 17 or 23 at one time, we're back down to 14. Our kids haven't quit all year long and didn't expect them to tonight.

"We challenged them. We thought we could do some thing to Tri-West that would let us hang in and hang around and when you're playing a team with their caliber, that's what you want to try to do is get in the fourth quarter with a shot," he continued. "I can't be more proud of them for going in with the attitude of 'You know, we got beat by 53 points in early December and we just lost by 12'. I think it a testament to our kids and the belief they have in each other and what we're trying to do."

McGaughey led the team with 10 points, followed by Robinson with nine and Elsiana Crosby with four.

With his Cougars squad being led by seniors McGaughey, Crosby and Dakota Malayer, Brothers was pleased with the effort they gave and the fact they never gave up.

"We met tonight before the game and said 'You know what, we're going to get it done' and not a single kid batted an eye. They all believed they could. We had kids step up and do some things in big situations, whether it was a deflection or a rebound. It's just not enough, and it's kind of the story this season, it's not enough to sustain all the way through the game. I couldn't ask for any more from our kids. They played hard all the way up to the final buzzer and that's what we expect," he said.

North Putnam ends the season with a record of 7-14.