Commissioners honor Millspaugh as Dispatcher of the Year 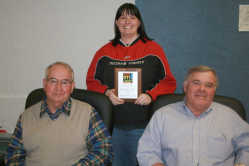 Erin Millspaugh, center, was honored as Dispatcher of the Year by commissioners Gene Beck and Jim Baird at Monday's meeting.

GREENCASTLE -- Erin Millspaugh is Putnam County's Dispatcher of the Year.

Millspaugh was presented with a plaque commemorating the honor Monday night at a meeting of the Putnam County Commissioners.

"Erin's been with us for about six years," said Putnam County Emergency Operations Center director Dave Costin. "In all our jobs, we've had temporary or little jobs come up here and there, and sometimes it can be hard to find anyone to do them. Erin has always stepped up to do those jobs."

Costin said Millspaugh has been instrumental in helping to train part-time dispatchers, as well as in organizing the center's files.

Millspaugh took her dispatching job right out of high school.

"For someone who came to us so young, she's done a great job," he said.

The commissioners also gave permission Monday for the DePauw Bicycle Club to use Heritage Drive for a bicycle road race and C.R. 100N for a 60-minute timed race, both on March 13, and another bicycle race on March 14 at Big Walnut Sports Park.

"There is no need for street closure," the request said. "The same event has run for five years and produced no complaints."

In other business, the commissioners awarded the bid for the installation of an air handler unit at the Putnam County Jail to Perfection Industries Inc. Perfection's bid for the job was $49,902.

The awarding of the bid was done verbally at the meeting, and a contract will be drawn up and subject to approval from both the commissioners and Perfection Industries.

Two other companies submitted bids for the project. Perfection's bid was the lowest.