No end in sight for winter weather 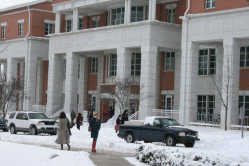 County schools were out because of the snow on Monday but DePauw held class as usual. The campus was busy between classes with students hurrying in the snow.

Presidents Day turned out to be yet another snow day for Putnam County school children. Snow began falling before the start of rush hour, and for those who had to work it was another slippery commute similar to the one last Tuesday that saw numerous accidents around the county.

This snowstorm is the ninth day since the beginning of December that the area has recorded at least an inch of snowfall.

According to Indianapolis-based meteorologist Paul Poteet, Central Indiana has seen 25.6 inches this winter. This is approximately five inches above the normal 20.2 inches at this point in the season.

A typical February in Putnam County usually sees 6.1 inches of snow. Last year we saw 5.6 inches, but we saw nearly that amount in a single day this month.

Helped along by the 3.6 inches of snow that fell last week, this month has seen over 10 inches of snow. The record for February snowfall is 21.7 inches set in 2003.

Temperatures have also been consistently below normal, and the upcoming forecast continues with temperatures the rest of the week below freezing.

According to the "Old Farmer's Almanac" we're not done with snowstorms yet. From Feb. 15 to 22 heavy snow is predicted, then snow showers and cold are predicted for the end of the month.

No relief is on its way for March either. The average temperature for March is supposed to be 29 degrees, with a snowstorm predicted for the middle of the month and additional snowfall toward the end.

"April and May will be warmer and drier than normal, with an early-season hot spell in mid-May" predicts the Almanac.

Meanwhile www.weather.com says more snow and cold on Wednesday, possible sunshine on Thursday or Friday and snow on Saturday.