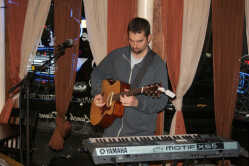 Branch Gordon plays a guitar solo during his Saturday show at the Swizzle Stick.
Order this photo

GREENCASTLE -- Local music fans were rewarded by staying right here in our humble little city on Saturday night, as Branch Gordon brought his live set to the Swizzle Stick for a three-hour show.

Gordon offered an engaging, energetic set, showcasing his talents as both an arranger and performer of poppy, bluesy indie rock.

Combining covers with a few originals, Gordon's music takes listeners on a journey through the past, while his performing techniques remind them exactly what era we live in.

While the sound of just Gordon's voice and a guitar provided organic simplicity, the most intriguing moments of the show came from Gordon's use of his pedal/synthesizer workstation. By creating a number of loops, the artist produced a sound it would have taken a band of four or five to produce.

These flights of fancy would generally start with a simple beat. From there, Gordon might play a melody on his guitar, recording a loop of exactly what he wanted. When he had what he wanted, that loop would join the original beat, playing over and over again.

From there, he might add a number of layers. He could record a couple of keyboard pieces or more on the guitar. On his first such song, he even added a number of additional percussion layers by drumming on the sides and top of his guitar.

To a music lover, watching him build these songs, layer by layer, was the highlight of the show. Once Gordon had what he wanted, there was a complex, multi-textured piece over which he could solo, sing or even rap. He did the latter after an extended and impressive guitar solo, lighting into "American Idol" sensation "Pants On the Ground," much to the crowd's delight.

Gordon admitted afterward he has a weakness for the song.

"That's my ringtone now," he said with a grin.

As impressive as these moments were, Gordon also connected with the audience through the simple use of good music. He went as far back as the early sixties for "Last Kiss" and "Under the Boardwalk," and kept it current with Kings of Leon's "Use Somebody."

Gordon also displayed a keen ability to rework favorites in less-than-familiar forms, such as a folked-up version of Michael Jackson's "The Way You Make Me Feel" and a barely recognizable cover of Lou Reed's "Walk on the Wild Side."

Gordon seemed most at home playing the pop-rock of Rob Thomas and Matchbox 20 ("I Don't Wanna Be Lonely No More" and "3 a.m."), Hootie and the Blowfish ("Hold My Hand") and Jason Mraz "I'm Yours."

And, of course, Gordon is a singer-songwriter. He peppered his set with a number of originals, including a fun story song called "Station Blues," about a gas station worker propositioned by a female patron.

A Gordon live show is a lot of fun and worth checking out. Putnam County will again have this opportunity on Monday, when Gordon plays at the grand re-opening of the Blue Door Café.