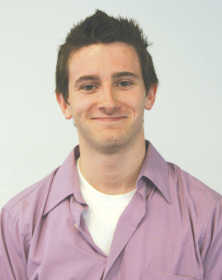 GREENCASTLE -- Adam Gilbert believes that if a movement toward positive change "starts from the grassroots up, the flowers will bloom."

To that end, Gilbert is taking a stand against a policy established by the U.S. Food and Drug Administration that bans gay men from donating blood.

Gilbert has organized "Advocates for Adam: Donate his Weight," an initiative that will take place on the DePauw campus during an American Red Cross blood drive set for Monday from noon to 6 p.m. and Tuesday from 10 a.m. to 4 p.m.

"As a homosexual man, I cannot donate blood," Gilbert said. "I hope to encourage people to donate in my place."

An "Advocates for Adam" campaign will take place outside the Neal Fieldhouse of the Lilly Physical Education Center. Donors will have the opportunity to sign a petition calling for modification of the FDA policy. Those who sign the petition will receive stickers bearing the message "I donate for Adam," and will also be given rainbow adhesive bandages to wear (rainbow items represent diversity within the gay, lesbian and transgender community, and are often used as a symbol of gay pride at right marches and other events).

The reason for the initiative is twofold, Gilbert explained -- he wants to support the blood drive as well as raise awareness and advocate for change of the FDA policy.

"This campaign is about educating people on discrimination that still exists today with a hope that, by changing this policy, we can positively impact our nation's blood banks," he said. "Since I can't donate to show my support, I'm asking for help. What the FDA doesn't realize is that they're segregating a population that just wants to help."

In 1983, the FDA put a policy in place stating that "men who have had sex with men, even once, since 1977" were prohibited for life from donating blood. The policy was set due to the spread of the human immunodeficiency virus (HIV) in the early 1980s within America's gay community.

"The policy was understandable in 1983," Gilbert said. "Very little was known about HIV and AIDS (acquired immune deficiency syndrome, a potentially fatal disease caused by HIV)."

Those who have engaged in heterosexual sexual activity with a person known to have HIV are only excluded by from donating blood for one year.

With today's advanced blood testing and HIV screening for all blood donations, Gilbert said the spread of HIV through blood donations would be "virtually impossible."

Gilbert is not alone in that opinion. In 2006, the American Red Cross, the American Association of Blood Banks and America's Blood Centers requested the policy be modified.

The FDA denied the request.

On March 4, Massachusetts Sen. John Kerry, along with 17 Democratic lawmakers, wrote to FDA Commissioner Margaret Hamburg asking the agency to rescind the policy.

"Not a single piece of scientific evidence supports the ban," Kerry said in a statement. "A law that was once considered medically justified is today simply outdated and needs to end."

Kerry then asked to see the data.

In response, the FDA announced that the policy would be reexamined in June by the Department of Health and Human Services' Blood Safety Committee.

"The policy shouldn't target a population that is willing to give, but should instead target risky behaviors that put blood donations at risk," said Laura Pearce, treasurer of United DePauw, the university's lesbian, gay, bisexual-pansexual and transgender organization. "Since every blood donation has to go through extensive tests before it is finally accepted into the blood banks, (gay males) donating blood should be a non-issue."

Gilbert said he was surprised by how many people had no idea the FDA policy existed.

"Several of my professors didn't know," he said. "I'd thought about doing a protest some time ago."

Gilbert, 21, a senior communications major, was spurred into action by a conversation with a friend.

"We made lists of things we wanted to do before we graduated," Gilbert said. "One of mine was to become political ... and by that I mean I wanted to fight the good fight because it was the right thing to do."

"I thought, 'Perfect!'" Gilbert said. "With the HIV trends and sound science, the proof that this policy is not needed is all right there." '

Gilbert, who still hasn't come out to many of his family members and friends, knows his sexual orientation will become public knowledge as a result of the "Advocates for Adam" initiative.

"The dialogue needs to happen," he said. "It's not about me. It's about all those who want so badly to help but can't."

Gilbert said he feels very safe at DePauw, and is open about his sexuality. He has, however, had people taunt him and yell derogatory comments.

"I hate it when people yell at me from car windows," he said. "Then they just drive off. What I wish is that people would just talk to me about whatever is bothering them."

Gilbert isn't sure what will happen once the blood drive is over -- he has considered the possibility of taking up other gay rights causes.

"My goal is to educate people on discriminatory policies," he said. "But right now, I'm trying to stay focused on this one policy."