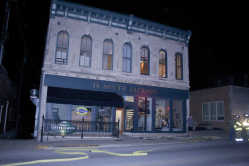 A call came in at 10:21 p.m. of a smoke alarm at 16 S. Jackson St., the home of the Galleria, the Greater Greencastle Chamber of Commerce, Hoods and Capers Bar and GPI, Inc.

Patrons of the bar also reported the smell of smoke.

Greencastle Fire Department was quickly on the scene, and calls went out to several other departments, including Madison Township, Cloverdale Township, Fillmore and Bainbridge.

GFD chief Bill Newgent said the department chose to start a full response, including the assisting departments, to be on the safe side.

After an extensive check of the building no fire was found, but the malfunctioning unit was located. It was removed from the case and the building. Newgent reported only light smoke damage and no water damage, as the sprinklers were not activated. 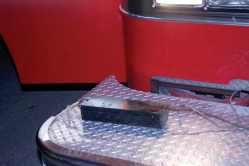 The culprit of a smoke scare Friday night at the Greencastle Chamber of Commerce building was a malfunctioning light ballast in a display case at the GC Galleria.