Lady Clovers drop a close one 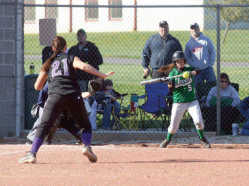 Cloverdale senior Breegan Andersen, right, lays down a bunt in the fourth inning Friday night as Clay City's Sloan Miller reacts. The ball would find its way through the Eel infield as two Clovers scored on the play.

CLOVERDALE -- It may not have been a victory, but the Cloverdale softball team has something to build on after Friday's 4-3 loss to Clay City.

While the Clovers (0-3, 0-2 WCC) committed four errors and left eight runners on base, they were in a battle with a quality Clay City (3-1) team for seven innings.

After a couple of rough games against South Putnam and injuries to Brandi Wilson and Brianna Hoff, a 4-3 game felt OK to coach Kim Bailey.

"These girls have been through quite a lot," she said. "My senior (Wilson) has been in a car accident. She should be back, hopefully pretty soon. My starting center fielder (Hoff) was in a four-wheeling accident earlier this week, so she's done for the year."

The Clovers' hectic week ended with two outfielders and a first baseman who had never played their positions before. All things considered, the Clovers put up quite a fight.

"I threw a freshman in right field (Justeena Wellington)," she continued. "She'd never played out there before, but she's been working hard in practice and we wanted to give her a chance."

Wellington even pulled in a key sixth-inning catch that likely saved runs and kept the Clovers in striking distance.

The key for the night was the leadoff batters. The Clovers' first person to the plate reached base in every inning but the third.

"I was having my leadoff batters take pitches until they got a strike because she was pitching high balls every first batter," Bailey said. 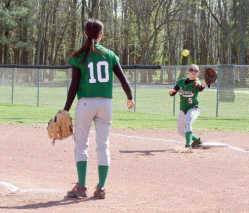 The Eels got the scoring started in the top of the third when Madison Sullivan sent a single to center field to plate two runs.

The Clovers battled back in the bottom of the fourth, though, when Breegan Andersen laid down what was meant to be a sacrifice bunt. Instead, the ball trickled through the left side of the infield all the way to the grass, as Sam Smith scored from third and Paige Gutierrez made it home from second.

The hit of the game came in the fifth, though, with Targett helping her own cause. She sent a shot over the left-center field fence to plate herself Karen Treadway for a 4-2 lead.

The Clovers would close it to one in the bottom half when Smith drove in Elizabeth Wiley on a groundout. It would be all they could muster.

The killer for Cloverdale was leaving runners on base. Of the eight left on base, five were in scoring position. Perhaps most damaging was in the seventh, when the Clovers had just one out and Kara Knapp at third and Gutierrez at second.

With the tying and winning runs that close, the game ended with two foul pop-ups to the first baseman.

"We still have some kinks to work out when we have players on bases. We left too many on base often times," Bailey said.

In the end, Bailey knows her team is heading in the right direction.

"This was an awesome game compared to when we played South Putnam. We have put South Putnam behind us," she said. "We're all looking ahead. With what I saw here today, we're going to be all right." 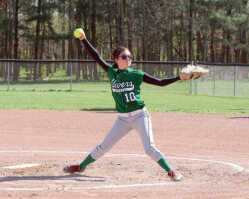 Targett and Booe; Gutierrez and Byrd

Next game: Clay City (3-1) is in action today at the Barr Reeve Invitational, beginning at 10 a.m.