Cloverdale fall to Miners at home 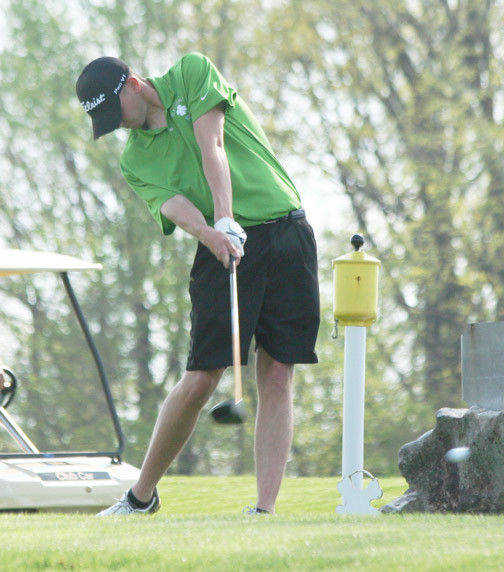 Cloverdale's Chris Arnold tees off on No. 12 at Clover Meadows Thursday. Arnold led the Clovers with a medalist round of 39, but the team fell 166-177 to the Miners.

CLOVERDALE -- Coming off an impressive start to the 2010 season, Cloverdale struggled with Linton-Stockton Thursday, falling 166-177.

Clover Meadows greeted both teams with ideal conditions and a group of golfers would be hard pressed to have better weather to perform in.

Cloverdale's No. 1 golfer Chris Arnold, after posting a season-opening round of 32, posted a medalist worthy round of 39.

Alex Evans recorded a 45 on the day, with Mike Matthews adding a 46 and Ryan Book a 47. Sam Jordan chipped in with a score of 51 and Colte Tomlinson rounded out the scoring with a 52.

Head coach Doug Wokoun was pleased with his team's effort, but saw some areas where they could improve.

"But, it's the second night out and overall I'm not terribly disappointed in what took place," he added.

Wokoun was also happy with his golfers from top to bottom on Thursday. Even when they struggled, they continued to battle and post good scores.

"I'm real happy with the way Chris battled today because he did not have as good of a round as he did Monday obviously," he said. "But a few other guys who did not like Mike Matthews, who did not play well Monday, he played pretty well tonight.

Linton-Stockton was led by Luke Jerrells' 40 and Cole Bradbury's 41.

The Clovers will host Northview Monday at 4:30 p.m.

Next match -- The Clovers will host Northview Monday at 4:30 p.m.