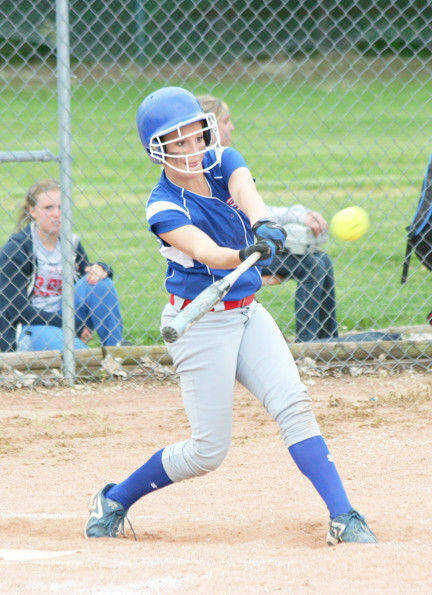 GREENCASTLE -- As South Putnam head coach Chris Jones so aptly put it following Monday's game, when two Putnam County teams get together, you can throw the records out.

Greencastle was South Putnam's equal Monday, falling to the Eagles 5-4 after having control of the game early.

Greencastle came out strong and aggressive, plating two runs to begin the game and displaying solid defense to hold the Eagles at bay early.

GHS head coach Robin Knapp was pleased with the effort her girls gave to open the game.

"I think the girls came out really fired up and came out scoring, which is nice to see in the very first inning," she said. "The middle of the game always gets a little bit tiring -- maybe not tiring, but a little lax somewhat. I think ultimately if this is what they're going to bring us and we can clean up our end on defense, it should be a good game."

Kaytlynn Beaman began the game by drawing a walk and was quickly brought home two batters later when Taylor Pruitt connected on a shot to right field that landed her on third. The next batter, starting pitcher Kayla Downing, hit it back to the pitcher, but Pruitt was able to cross the plate to score the second GHS run of the inning.

South answered with one run in the bottom of the inning after Krystal Welch hit a double and was moved to third by Emily Dabkowski's single to right center field. Welch was brought home when the Tiger Cubs' Downing was cited for an illegal pitch.

After a scoreless second inning that zipped by, South Putnam found its offensive stride and posted four runs on the Tiger Cubs.

The Eagles were able to capitalize on a few GHS miscues in the inning. They also had five straight batters reach base en route to their four-run outburst. That would be the last runs the Eagles posted, but in the end, it proved to be enough.

Greencastle came on strong again in the fifth inning, scoring a run on two hits. Erynn Beck accounted for the Tiger Cubs' run after a South Putnam error allowed her to reach base. The Eagles would record an additional error in the inning.

The Tiger Cubs again added another run in the top of the sixth inning to pull within one. Riley Seahorn hit a double to center field. Pinch runner Kay Wood entered the game and scored after South Putnam committed a throwing error.

"We won, and, honestly, that's the most important thing right now, especially with how tight out conference is right now," South Putnam head coach Chris Jones said. "They're a good team. They're really good fundamentally; they hit the ball really well and put it in play and they put some pressure on defense. We had some errors tonight, but like I told the girls, they were aggressive errors as opposed to being on your heels defensive type errors."

For Greencastle, Monday was just another in a long line of tough one-run loses, but Knapp is positive her team is doing what they need to be moving in the right direction.

"We've had our bouts with losses by one-run games and you know if that's our biggest weakness, I'm confident in how they will end up, because the energy they're bringing and you can hear them all game and they're enthusiastic. That's the hardest part to bring to the game and if it's just one or two runs, I'm confident -- we have about two weeks or so to peak, so we're getting there," she said.

Jones was also pleased with the effort from his squad gave Monday, especially after a few errors in the field.

"I thought we did a good job of picking each other up and bouncing back," Jones said. "Brooke did a good job. I think she only allowed one earned run, which you can't tell by the score, but she did a nice job bearing down there even when we did make the errors.

"The defense did a good job overall behind her, making plays and things like that. Then we put the ball in play and took advantage of a few of their miscues to get some runs -- we just got the win when it comes down to it," he concluded.