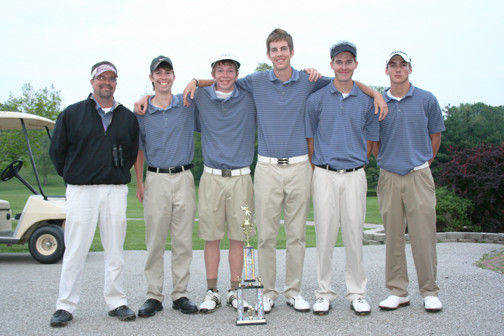 CLOVERDALE -- On Thursday, the heavens opened up on the golfers participating the 2010 Putnam County Golf tournament. Fortunately, the heavens poured down sunshine instead of rain, and the tournament went off without a hitch.

Behind the power of Jimmy Wheeler's medalist round of even-par 36, the Greencastle Tiger Cubs were crowned the champions, beating out the host Clovers by 10 strokes, 161-171. South Putnam was third with a 183 and North Putnam was fourth with a 198.

Wheeler said a nice warm-up round on Wednesday laid the foundation for Thursday's performance.

"I had a really good practice yesterday, mentally," Wheeler said. "I just didn't expect to play well, I just came out and played and had a good day. I just focused on each shot individually as opposed to the round as a whole."

With all the high tech advances in golf equipment, Wheeler utilized a relic from the past to card his low round score. Wheeler used his grandfather's Bullseye putter from the 1970s during Thursday's round, and from the results, it's only gotten better with age.

Wheeler was joined on the All-County team by teammates Eric Embry, Tyler Hopkins and Brad Haussin. Embry shot a 39, while Hopkins and Haussin shot 43 each.

Haussin had a nice round going, but an errant tee shot on No.17 hit the tree line and had to lay up in the fairway. From there things went from bad to worse as Haussin hit his approach out of bounds and had to take a drop.

Wheeler was the tournament's medalist winner after posting a score of 36.
Order this photo

For Cloverale, Chris Arnold was the low scorer with a round of 38, just two shots behind Wheeler. Gary Williams' 42 and Sam Jordan's 43 landed them on the All-County team along with Arnold.

While his team finished in second place, Cloverdale head coach Doug Wokoun was happy with the round his team put together.

"We played, I thought, pretty well," Wokoun confessed. "There were some things, a couple of holes where we probably could have played better, but I think Greencastle came out and demonstrated that they're the best golf team in the county right now. A 161 is about as good a score has been shot since I've been the head coach here.

"We thought if we shot 170 and they had an off day, we might have a chance at them. We just about did what we thought we had to do. But, Jimmy (Wheeler) just had a fabulous round. He just really played well. Our guy that played with him said he didn't miss a shot. So you throw a 36 out there and then Eric Embry had a nice round and Tyler Hopkins played well today too, so they did what they had to do," he said.

As with the rest of the team, the Clovers will have to bounce back in quick fashion, as the West Central Conference Match will take place on Saturday. But according to Wokoun, that's just how his boys like it.

"That's the way the kids like it. They want to play and I just hope the weather, we were fortunate tonight, I just hope it stays that way and we're able to have a good day Saturday," Wokoun commented.

The South Putnam Eagles had some impressive scores and shots Thursday, but they ended the day in third place, something head coach Brian McClure wasn't too pleased with.

"I'm sure they're going to look back and see shots they are not happy with and things we could have done better. We'll take it as a positive and we'll find something to learn from it and hopefully we'll do better Saturday," he added. 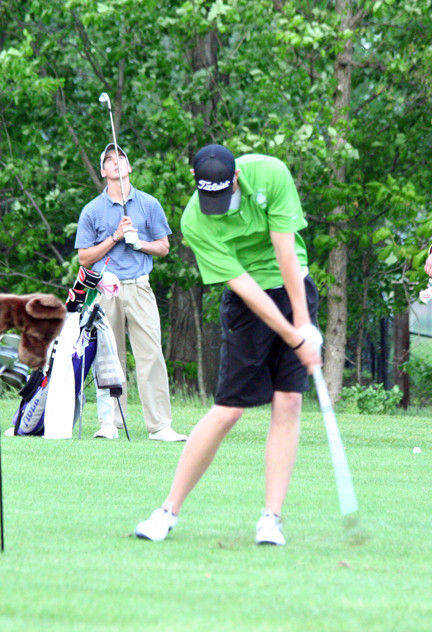 Cloverdale's Chris Arnold was the Clovers low scorer with a round of 38.
Order this photo

The Eagles began the day nicely as Dean Varvel chipped in on his opening hole en route to his team-low 44. Teammate Dylan Gilbert also added a 44, while Alex Kelly shot a 46, Mike Nichols a 49 and Alex Eickhoff a 54 to place the Eagles solidly in third place overall.

North Putnam head coach Nathan Martindale spoke during the round about his team's need to gain a mental edge and be able to bounce back after bad shots. Following the round, he reiterated that aspect of the game once again.

"I saw some mental lapses of kids getting frustrated when they make a bad shot," he said. "For them, it's about moving on to the next shot and they're just not able to do that right now. It's a learning experience, cause we have some guys that can post some good scores.

"But if they have one bad hole, it snowballs into two, three or four bad holes and the good golfers aren't able to put that behind them. That's kind of where we are as far as golfers right now," Martindale said.

Looking forward to Saturday, Martindale wants his squad to relax and let their game come to them.

"Just the same way. Just grinding it out and you never know with this weather what the conditions are going to be like. It could be a day where we have to grind it out or it might be a good day to go out there and play some golf and relax and make the strokes. We can't get too tight with it," Martindale said.

The teams will travel to Deer Creek Golf Course Saturday for the West Central Conference tournament.