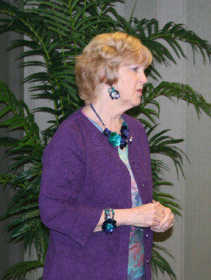 GREENCASTLE -- The 14th annual Save the Day campaign kicked off in March in Putnam County. On Wednesday, donors were honored during a breakfast sponsored by Wabash Capital and First National Bank.

The money raised in the campaign goes to help fire victims in Putnam County.

"Proceeds of the Save the Day Campaign in Putnam County are used directly in this county for future fire victims," said Putnam County Wabash Valley Red Cross board member Ginger Scott.

Stephanie Land, emergency services director for the Wabash Valley Chapter, spoke to the donors at the breakfast of the importance of volunteers.

"Volunteers make it possible that we have kind, caring people to distribute the money you have donated," she said. "Whether one person or a family of eight is affected, a fire is a huge disaster."

"Helping people is very rewarding for me. I meet the nicest people in the most dire of circumstances. I can't ever imagine not doing this," Land said.

She explained that every county has a local response team that tries to be at the location of a fire within two hours ready to assist the victims.

"We take our responsibility of your donated dollars very seriously," she said.

The Wabash Valley is also prepared for larger disasters. They have lists of organizations such as churches willing to be used as shelters. They have trailers with cots and sleeping mats and fully stocked with water and supplies.

"In Putnam County, the Red Cross has several shelter agreements as well as a trailer," added Scott. "We are prepared. We hope we don't need it but we are ready if we do." 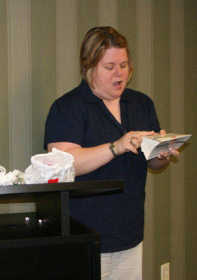 Land continued to talk about the national Red Cross databank that has lists of volunteers, many who are specially trained, to head out with short notice to areas in need of help.

There are four Putnam County volunteers in that national databank.

One of Land's goals is to bring younger people into the volunteer forces. She told breakfast attendees that the average age of most volunteers is around 60.

"I have one volunteer whose name is Jim who is 85. He was at a large paper company's fire in Terre Haute. He was handing out supplies to firefighters," said Land.

"I'm really glad to see some young people here today. We need more of the younger generations stepping up and coming in," she said.

Land went on to talk about an initiative at Rose-Hulman to recruit more Red Cross volunteers. She hopes to see it come to DePauw University soon.

"We've been talking to DePauw," said Skeel. "They are very receptive."

State Representative Nancy Michael spoke up saying how impressed she always is with DePauw students and their willingness to volunteer and take on community projects.

"We go into the schools and teach them the tools to save somebody's life. Once you educate them, you can't take it away from them," she said. "We teach them what we teach in some of our adult classes.

As for volunteering herself, Land has been involved with the Red Cross since Hurricane Katrina. For her, working in the non-profit sector is her life.

"I love what I do and I am happy doing it. And there are other people like me out there. I'm hooked," she said.

The goal of the Save the Day campaign was to raise $40,000 in 30 days. It included numerous counties. In Putnam County, Ginger Scott and Kathie Skeel led the campaign with the assistance of Ken Heeke, Cindy Schrader, Chasity Wood, Lisa Clark and Tracy Maynard.

Contributions to Save the Day can be mailed to American Red Cross Wabash Valley Chapter Putnam County Unit, P.O. Box 793, Greencastle, IN 46135.