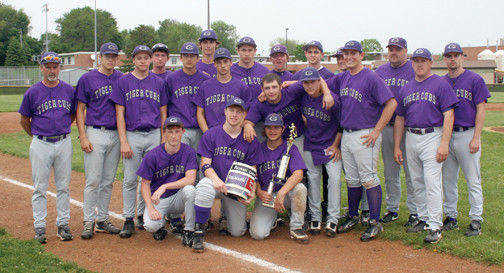 GREENCASTLE -- The championship contest of the Putnam County Classic baseball tournament started off with a bang.

Both Cloverdale and Greencastle had every intention of getting off to a good start. It was the Tiger Cubs that would bring the game to the Clovers late that allowed Greencastle to win the title game 8-2.

Cloverdale opened up the final contest of the day by scoring two runs in the first. Ethan Atwood led off with a walk and was later able to score on a single by Brian Dale. Older brother Jeff Dale was walked before Kyle Martin hit into a double play.

Jeff Dale would be out at second, but the throw to first was errant, allowing Brian Dale to score and give the Clovers an early 2-0 lead.

Greencastle would not take long to respond. The Tiger Cubs sent seven batters to the plate in the bottom of the first ,with Andy Bell continuing to expand on a fine county tournament with a leadoff single. Ryan Pettit singled behind the Tiger Cub right fielder before Keegan Remsburg grounded into a fielder's choice, one that saw Bell out at third.

Pat Richardson stepped up next and smashed a single to plate both Pettit and Remsburg, knotting the game at two. Jesse Vermillion singled as well, but was caught trying to steal second base and the remaining threat would eventually peter out.

Pitching then became the name of the game, as Josh Burdette of Cloverdale and Vermillion of Greencastle kept the offenses in check through the fourth inning. Vermillion would not allow a man past second, while Burdette rallied in the third inning after Remsburg and Richardson reached scoring position.

In the fifth, Greencastle would grab the lead for good.

After new pitcher Kyle Johnson went through the order in the top half of the fifth, Remsburg flied out to center. Richardson walked and Vermillion singled him over to third. Johnson hit a sac fly to right to score Richardson to make it 3-2 Tiger Cubs.

DH Landon Miller walked, while Vermillion stole third. A single from Nataniel Velasquez scored the runner on third to extend the Tiger Cub lead to 4-2.

Both Dales would reach base in the top of the sixth for Cloverdale, but Martin grounded to third to pick off the lead man and back-to-back ground outs prevented the Clovers from replying.

Burdette walked Bell and Pettit to start off the sixth and was replaced by Jeff Dale. The new pitcher walked Remsburg before Richardson blasted the first offering from Dale for a bases-clearing triple. Vermillion hit a weak single that didn't allow Richardson to score, but Johnson's grounder to third was hit well enough for the senior first baseman to cross home and make the score 8-2.

Cloverdale would not go quietly in the seventh. Franke Skiles singled after Austin Mannan struck out. After two walks and a ground out, the bat of Jeff Dale nearly gave the Tiger Cubs a scare as he hammered a shot to deep center field. Hunter Mitchell was in a good position and snared it on the fly to save three runs and win the contest for the hosts.

For the tournament, Bell reached on seven of his eight plate appearances, scoring twice. Richardson scored three times while knocking in five. Brian Dale reached base five times for the Clovers, scoring once and driving in two.

After the contest, Greencastle coach Troy Remsburg pointed to aggressive hitting as the key.

"We got in to a habit of watching strikes. We needed to be more aggressive with the bats," Remsburg said. "We didn't want to get into deep counts. When we hit the first strike, we scored runs. When we got deep into counts, it killed us. First strike hitting was the key."

Aggression on the base paths was also a key component to the contest.

"We've tried to be aggressive and at times it hasn't worked. Lately we have been getting away from it," Remsburg added. "We need to start putting the pressure back on the opposing team, make the runners make plays and not rely on the bats so much."

"Playing in the first game helped a little bit. I've seen it happen both ways when you play early," Remsburg also added. "Some times we're better when we play back to back contests and sometimes our minds wander with all the time in between games. Today we were focused all day on both games."

Cloverdale coach Bryan Archer said his team was not put off by playing the second game and third game in such close proximity.

"When it's game time, these guys go," Archer said. "Once the game starts, we've got to be ready to play and they were today. We just couldn't produce, couldn't get it together at times. Greencastle played well. Both pitchers were good today. We just need to string hits together for runs and didn't in the second game."

"Overall, our hitting 1-9 was good today. We were aggressive, smart, got walks. All the things we've been preaching to the guys, today they took it to heart. All the coaches are proud of the guys," Archer added. "We had one bad inning out of fourteen. We had few errors. Often, they just put the ball where we weren't. That's just the way it goes sometimes."

With the county tourney behind both squads, attention turns to today and tomorrow as the teams were already scheduled to play each other on both days.

"We need to work on hitting their offspeed pitches," Archer mentioned. "They did a good job of mixing things up. We need to learn their set-up and stay back. Nothing there that is unfixable."

Even after his team had just beaten their last opponents, Remsburg was still cautious about facing Cloverdale again.

"We have to be a little more aggressive with the bats. They're a good hitting team and they can sit you down in a hurry. Maybe they don't have a great record, but they still have a lot of ball players on that team."