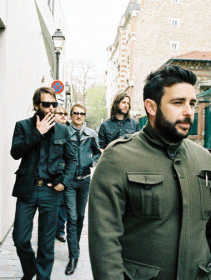 Rock music is supposed to be loud, right?

A great album is supposed to jump up and grab your attention with great opening riff (like "Highway to Hell") or that one song (like "Nevermind") or just general loudness and aggression (any great punk album).

On "Infinite Arms," released Tuesday on Brown Records/Fat Possum/Columbia, Band of Horses takes a slightly different approach, easing the listener into a new album filled with warm, inviting, dreamlike vocals and a wealth of textures that go beyond simple guitar rock.

No individual tracks or elements are immediately grab the attention -- with the possible exception of Ben Bridwell's vocals -- but the album is just plain good from wire to wire. It can be listened to again and again.

The result is the same, though: an outstanding piece of rock music.

To be sure, the album has its straightforward rockers like "Compliments" and "NW Apt." While these are two of the standouts on the collection, the band is at its best in other areas.

The fifth track "On My Way Back Home" opens like an acoustic folk number that gives way to Ben Bridwell's vocals. It settles into a light mixture of vocals, guitar and multiple layers of percussion.

The title track follows immediately, opening with a chorus of backyard amphibians. The song is carried by more Bridwell vocals and the introduction of a string section, before fading back into the sounds of the country at night.

It's music that's melancholy, yet content at the same time -- my favorite kind of music.

The band takes a more pop approach with "Dilly," an instantly accessible number with Strokes-esque guitar work and some nice interplay between Bridwell and his background singers.

"Older" provides an entirely different sound with its country leanings. It may be the best track on the album.

What may be most fun about this record is it's hard to pigeonhole. Is it alternative? (Probably.) Is it Americana? (At certain moments.) Should we just settle on calling it rock? (I'd say so.)

Is it high-quality music? (Absolutely.)

"Infinite Arms" is a delightful album. What it lacks in swagger, it more than makes up for in accessibility and overall quality.

Over repeated listens, songs such as "Older," "NW Apt.," "Dilly," "Blue Beard," "Infinite Arms" and "Neighbor" rise to the top. But even in making this list, I've named half the album. Let's just say there's good stuff across the board.