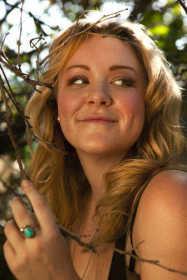 Yet, it's not so much that Audra's music sounds directly like anyone else's, as it simply has a classic feel. There's Audra's huge voice over minimal accompaniment. Next to her, the tremolo guitar and occasional accordion or banjo sound feeble by comparison.

The mind runs wild with comparisons. Patsy Cline always shined like this. Dolly Parton is still doing it.

What's funny with these comparisons is Audra is signed to SideOneDummy Records, the primarily punk rock label much better known for acts like Flogging Molly and Gaslight Anthem.

And then the perfect comparison hits you -- Neko Case. Like Case, Audra has the jaw-dropping vocals, the dark and witty songwriting and the ability to mix country and folk-tinged music in nicely with a punk or indie crowd.

None of this is to say Audra is nearly as polished or accomplished as any of these artists; "The Happiest Lamb," released May 18 by SideOneDummy, is her first full-length release. Her only previous release was last year's five-song EP "Haunt."

Indeed, much of the attention being paid to Audra's debut has focused not so much on her performance, but on "Who I Was Born To Be," a song she co-wrote that was recorded by Susan Boyle's debut album.

While the song reveals Audra's ability to write a beautiful song that paints a vivid picture, so do the songs on "The Happiest Lamb."

The album kicks off in excellent fashion with the title track. We get the story of Audra (the "lamb") and a man she used to blindly follow (the "shepherd"). Only she discovers he has lots of sheep.

She moves on after getting the sage advice "No shepherd man alive can grow the wool that gets him paid."

From the fun and wit of this, though, she moves on to the mournful "Millionaire." The song ponders the unhappiness of being poor, along with the lack of fulfillment in being rich. Audra delivers the lyrics in a more husky voice than normal, outlining the sadness of the song perfectly.

The record gives us a number of other strong numbers. "Lightning in a Bottle" gives us the wonderfully sad lyric "I made lightning in a bottle, but I forgot the recipe." Does anything sum up regret better than that?

"Sullivan's Letter" is driven by a snare drum playing the sound of marching and tells the story of a love letter written by a doomed soldier.

"Bandida," another war song, mixes it up with a nice old-time Appalachian sound.

The best thing that can be said about "The River" and "Little Sparrow" is they are simply two of the most beautiful moments on the album.

"The Happiest Lamb" is a very promising debut album that dabbles in a number of areas. Audra Mae's voice is suited for it all -- country, folk, rock, pop, jazz, blues. She has the kind of voice other singers would kill for.

The big question is, though, what direction does her career take? Does she pursue one area in particular or does she continue finding the right mix of it all? Anything is in play here, and that makes it exciting.

One of the most exciting aspects of this album is it still shows room for growth. Audra's performances are good here, but not yet great. She leaves little doubt, though, that she'll get there.

Someday soon, this artist will be catching lightning in a bottle, and I don't think anyone will be forgetting.

Released: May 18 on SideOneDummy Records