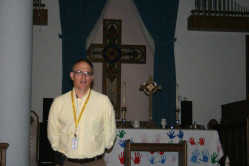 GREENCASTLE -- It was fitting to have the first meeting explaining what National Registry means for homes and neighborhoods in the more than a century old First Christian Church in downtown Greencastle.

Minister Paul Champion opened the meeting by talking about the history of his church whose current sanctuary was built in 1894 on the site of the first church.

"The life of our nation's churches has often been that they are the ones to host public meetings because of their size," said Champion as he welcomed the community to the meeting.

HPS President Phil Gick explained the Heritage Preservation Society is looking at a project that would nominate three Greencastle neighborhoods as historic districts. These are the Eastern Enlargement, Old Greencastle and Northwood Residential Districts.

Paul Diebold with the Division of Historic Preservation and Archeology (DHPA) was at the meeting to explain what national register designation means and what it does not.

Most importantly, his message was to home and building owners, that national registry does not restrict private owners from making alterations, restricting the sale or use of private property or force an owner to open their home to the public.

"The benefits," said Diebold, are state and federal tax benefits and grants to local government and non profits. Owners can get an investment credit of 20 percent of the restoration on their federal income tax."

Additionally, owners can also take a tax credit deduction on their state taxes for rehabilitation programs.

Diebold explained that National Registry recognizes you have to have functioning kitchens and bathrooms, wiring and plumbing. Rather, they look at the integrity of the structure, the windows, doors, hardware and trim among other things.

He talked about the process to apply for national registry and what it entails. He gave examples of buildings, structures, events, persons and architectural property that have achieved the designation.

Also present at the meeting to talk about the process was John Warner, the contractor hired by HPS to make the proposal for the three neighborhoods they are hoping to have designated historic.

His first job will be to look at every structure in the districts and authenticate each of them.

"He will only be looking at the outside of the structures from the public access area," explained Diebold. "He will not be looking or documenting the inside of any buildings for this project."

The largest of the proposed districts is the Eastern Enlargement Historic District that contains approximately 243 resources. Locust and College Streets on the west, Washington Street on the north, Wood Street roughly bound it on the east and Anderson Street on the south.

This historic district was identified in the 1982 Putnam County Interim Report. The area currently proposed includes a few additional blocks adjacent to and northwest of the area that has been traditionally referred as the Eastern Enlargement.

This neighborhood consists of late nineteenth to early twentieth century residential homes and buildings of prominent professional, business and academic citizens of Greencastle.

This area basically encompasses a four-block wide and five-block long stretch of housing that lays between the center of DePauw University campus on the west and the university president's home "the Elms" on the east.

Many of the homes are large with high ceilings, large porches, iron fences and carriage houses.

National Register is a rigorous process that clearly demonstrates that the neighborhood is historically significant. Hopefully it encourages both current residents and future residents to preserve the historic fabric of the neighborhood.

A second area also identified in the 1982 Putnam County Interim Report is the Old Greencastle Historic District. This proposed historic area contains approximately 130 buildings. Madison and Gillespie Streets on the west, Liberty Street on the north, Market and Jackson Streets to the east and Popular Street to the south, roughly bound it.

This area lies adjacent to and immediately to the west of the National Register listed Court House Square Historic District. This district represents the modest, but comfortable dwellings of Greencastle's workers and business people during the 19th and early 20th centuries. The neighborhood consists mainly of mid-nineteenth and early twentieth century residential resources of a more modest scale and style.

The last of the three districts is the Northwood Historic District, which contains approximately 163 resources and is roughly bounded by Hillsdale Avenue and Northwood Blvd on the west, Shadowlawn Ave on the north, North Arlington Street to the east and East Franklin Street to the south.

"This district was not identified in the 1982 Putnam County Interim Report, but several individual homes were noted as 'scattered sites' eligible for listing," said Gick.

"Many of these houses weren't quite 50 years old (a criteria for National Registry) but are more than that now," added Gick.

Putnam County is one of the counties identified by DHPA as being "under-represented in the National Register: and all three proposed districts in this project are "Historic Districts Targeted for National Register Nomination" by DHPA.

"We really hope anyone who has a concern about this project or their home or structure will contact us to discuss it and give us an opportunity to give them the facts," aid Gick.

Concerns or questions about the project should be directed to HPS President Phil Gick who can be reached at 848-1111 or e-mail phillip.gick@us.army.mil.

Information about National Registry is available by visiting the DNR website at www.in.gov/dnr/historic or calling 317-232-1646 or emailing dhpa@dnr.in.gov.

"There is really a lot to be gained from a listing in the national register historic district," said Diebold.