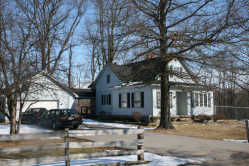 The last functioning one-room schoolhouse in Putnam County was built in 1870. It is a private home today. Several decades ago it was filled with the music and laughter of school children.

GREENCASTLE--Sitting on a quiet country road amid tree-lined pastures, the last functioning one-room schoolhouse in Putnam County is now the private home of a DePauw professor and his family.

In fact since it ceased being a schoolhouse it has been the home of several families. Today the building is a three bedroom, one and one-half bathroom with a full basement home.

Putnam County lifelong resident David English lived in the home for 22 years with his wife and daughter.

Two years later it went on the county sheriff's auction block where it was sold to George Starke for $1,500. It was deeded by court order to Arthur McGaughey on Feb. 1836 who sold it to Daniel Chadd in 1838 for $1,100.

Chadd sold it to Edward McCaughey in 1849 for $1,500. It was turned over to the McCaughey heirs George Day, William Stevenson and James Gillespy in 1866.

Somewhere between this time and 1870 the schoolhouse was built on the property. The Law of 1851 authorized the levy of taxes for schools in Indiana. As early as 1855, the county recorded 468 students in common schools and 92 in high schools.

Gillespy turned over the property to Fautley Garner in 1875 for the whopping price of $5,939.55, who sold it back to James Gillespy in 1878 for $3,600. At this point there was a dispute over ownership of the land because some of the heirs were not Indiana residents.

Gillespy won the fight and in 1895 sold the land to Ida Albaugh for $1,000. She, in turn, sold it to the Greencastle School Township for $50. It was later sold to Albert Albaugh at public auction for $225.

Albaugh sold the building and a portion of the land to Roscoe and Ethel Wells in 1920 for $500.

It continued to change hands through June 1947. Then owner Russell Beams sold the building to First Citizens Bank & Trust.

It changed owners between the Hubbard, Lear and Cooper families until it ended up in the hands of the Veterans Administration.

Eventually it ended up as the home of the English family, who say they enjoyed the home immensely. All three family members as well as some of their friends did experience some odd noises and occurrences in the old building.

Brie Reinoehl, English's daughter told of televisions turning off and on when on one was in the room.

"When I was 12 years old, I was upstairs alone in my room and heard the television turn on. Thinking it was my mom, I called down to her through the register grate in the floor. She didn't answer so I went downstairs. All the lights were on and so was the TV. They weren't on when I went upstairs from school. I called my mom and told her to get home now," said Reinoehl.

She also recalled having items disappear all the time and turn up in odd places.

Her strongest memory is of a spot on the stair landing that continued to grow larger over time.

"I saw it all the time on the landing. I thought it was a lady," said Reinoehl, who also drew a picture of it. Her father says she always referred to it as an angel.

English and his wife Margaret felt whatever was in the house was benevolent. They often heard music coming from the room that was once the music section of the school.

"There was always a lot of laughter coming from different places in the home," said Margaret. "And music -- we heard music on the landing all the time."

English recalled another experience that a friend of the family had at the home that was somewhat unsettling.

The friend was staying in the house while the Englishes were gone. He heard the two dogs outside going crazy. They were running in circles, foaming at the mouth and apparently very scared.

"They were howling and making horrible noises. At the same time, Larry had lights flickering off and on and could hear music playing in the house," said English.

The animals were big, strong dogs, one being an Irish setter and the other an Alaskan Malamute. They each had their own fenced in field because they could not be together without fighting.

"Larry got scared in the house and he ran out to get the dogs, who both jumped into his little Volkswagen Beetle and huddled on the back seat side by side, quivering and not moving," said English.

Larry drove away and stayed away for over four hours before going back to the house in the light of day. Everything was quiet and peaceful.

Besides paranormal activity, the house saw a lot of visitors. Many descendents of students and even a few students stopped by the home at various times and told the English family stories about attending the school.

"One time we had a young girl riding by on a horse stop and tell us her grandmother once lived in the house. The teachers at the school used to live in the back room of the house while they taught," said English.

Since it was first built in 1870, the old building made mostly of yellow poplar has seen several additions to it. It began as a classic "A" frame building and today has three bedrooms and a full bath upstairs as well as a kitchen, breakfast area, dining and living rooms and a den. There is also a full basement and a breezeway connecting the house to the garage. The Alexander family made most of the changes to the home prior to the English family owning it.

Located on C.R. 350 S, the house is a charming home. Its current occupants report no paranormal activity or noises, although owner Janet Musser told the Banner Graphic since hearing the story of activity in the house she has been "listening more to sounds at night--especially when the dogs bark for no reason."