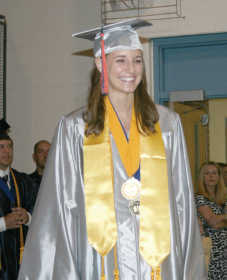 Callie Fehr leads the NPHS graduates into the gymnasium.

BAINBRIDGE -- Saturday morning, the class of 2010 Putnam County graduates marched into the North Putnam High School gymnasium. The 130 seniors were prepared to take one final walk as their 12 years of school came to a glorious end.

With every milestone, there is always an excitement, a little anxiety and lots of hugs. For this next generation of North Putnam student's the excitement, anxiety and pride showed on every face.

They walked with strong strides down the aisle and stood proudly at their seats.

Laura McGaughey spoke to her classmates with a poem and a moment of reflection. This was followed by the choir singing the national anthem and the song "Don't Stop Believing."

Jacob Munns and Cameron Tallan performed "Let it Be" by the Beatles, along with Maggie Lubinuski who also performed a special music number for her classmates.

"Now is the time to reflect and appreciate," she told the group.

High School Principal Alan Zerkel spoke to each and every student in the senior class. 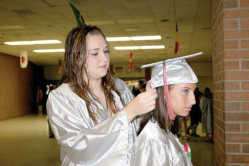 "I have watched you struggle to understand your gifts and talents. It's taken me more than 61 years of struggling to know my own. Don't shortchange yourselves by failing to recognize your gifts," said Zerkel.

His speech contained stories about many student adventures both funny and poignant. From the students who rode a snowmobile to school in freezing weather to those attending universities and schools like Purdue, Vincennes and Rose Hulman, Zerkel urged the graduates to "strive to obtain as much education as you can."

Smiles were big as each student took their moment on stage and received their high school diploma. Superintendent Dr. Mary Lovejoy presented the graduated class of NPHS amid cheers from the packed gymnasium.

And those smiles grew even larger as the 2010 class of NPHS excitedly took their last march as the band played "Sine Nomine" by Ralph Vaughan Williams.

"I did it mom," yelled one student as she passed her family. Her mother merely nodded and smiled amid her tears.

"Yes, you all did it," she said. "Congratulations."