GREENCASTLE -- The Greater Greencastle Chamber of Commerce and Teacher's Credit Union recently honored a pair of 2010 county graduates for their accomplishments on the field and in the classroom. 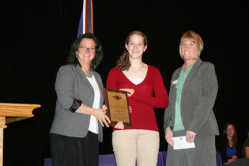 Ball is the daughter of Dr. Thomas Ball and Helen Bunn. She was a four-year member of the GHS soccer and swimming and diving teams, as well as completing one year each of tennis and track and field.

As a soccer player, she was a part of two sectional championships, a two-time All-WCC performer and was once named the team MVP. In the pool, she twice qualified for the IHSAA state finals as well as four years on the Putnam County and WCC championship squads. She was also All-WCC four times.

In the classroom, Ball was the valedictorian of her class, with a 4.0 GPA. She was twice named WCC Academic All-Conference, high honor roll for four years, accumulative honors for four years, top 10 percent of the class of 2010 and a National Honor Society member. 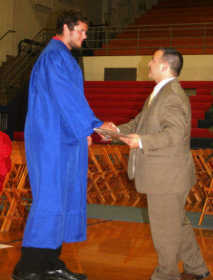 Masters, the son of Rick and Sharon Masters, was a four-year member of the football, basketball and track teams.

He is a 2010 North-South All-Star Football Game participant, 2010 Region 6 All-Star and All-WCC for his senior year in football. He was named a football captain, 2010 Indiana Football Coaches Association Top 50, AP 2A All-State and the Indiana Football Digest Prime Time 25. He also received Covenant Christian's opponent sportsmanship award for basketball in 2010.