Town of Cloverdale wins lawsuit, uninhabitable house to be razed 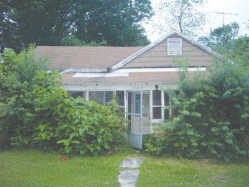 This structure at 203 S. Lafayette St., Cloverdale, was deemed unsafe and uninhabitable by building inspector Mark Cassida in January 2009. Following a year-and-a-half battle, the house will join four other vacant structures for demolition.

CLOVERDALE -- The Town of Cloverdale recently won a court case against a man who filed for an injunction on a demolition order to tear down a derelict structure he owns.

The house owned by Jeff Everman at 203 S. Lafayette St. was deemed unsafe and uninhabitable by building inspector Mark Cassida in January 2009. It was found to have severe structural issues including uneven floors, an exterior wall exposed through shingles and a gas water heater with a 10-year-old red tag.

The town had concerns of safety, especially the safety of children who may play in or around the unsound structure. In February 2009, Everman was given written notice by the town stating his structure should be demolished pursuant to the unsafe building code.

The following month, Everman appeared before the Board of Zoning Appeals and requested his property be saved from demolition, as he felt the structure was sound.

Everman explained to the BZA during the March 2009 meeting the red tag on the water heater had been corrected and the other issues listed on the inspection report were "minor issues." He added the premise had been secured with locked doors and windows, which are now broken and missing.

The board agreed to give Everman a six-month extension to bring the house up to compliance with building code -- clean up the property and making it habitable along with other specific requirements. Six months later, Everman had not fulfilled the requests of the BZA.

In October, Everman filed a request for appeal of the demolition order in Putnam County Circuit Court. However, the appeal was not filed in a timely manner and Judge Matthew Hadley denied his injunction based on ample evidence presented by the town.

"The town was well within its rights," said the town's attorney Allan Yackey during the council meeting Tuesday night.

The structure will be razed following a 30-day appeal time.