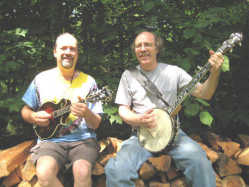 GREENCASTLE -- The 17th season of Parkfest summer concerts kicks off Tuesday with a 7 p.m. performance in the Robe-Ann Park band shell by Mike Van Rensselaer and Steve Terry.

While this season begins with the same performers who began the series in 1994, it also features a new twist. The popular farmers' market will expand from its Saturday morning venue on the square to Tuesday evenings in the park, where local growers will be selling their garden produce during the concerts.

Van Rensselaer and Terry are no strangers to farmers markets, having played for a number of years at the Bloomington market, in addition to the Greencastle Saturday morning affair. They have also been heard at area schools, churches, festivals, coffee shops, pubs and parks.

Their concert selection includes traditional 1800s American roots and Irish music, mid 20th century country and bluegrass, folk rock from the 60s and 70s and an original ballad about the 1861 murders in the northern Putnam County town of Groveland.

The Parkfest concert series will continue on Tuesday evenings for the rest of the summer. Upcoming performances will be by The Fret Set on June 22, Brazil Concert Band on June 29, Convergence on July 6, Mongrel Dogs on July 13, Covered Bridge Barbershop Chorus on July 20, Lutherans on Bluegrass on Aug. 10, Tony Harmless on Aug. 17, Saturday Shoes on Aug. 24 and Dennis Furr and Anthony Mullis on Aug. 31.

Parkfest was created to provide an opportunity for the community to celebrate its local musical talent in a setting where entire families can enjoy summer evenings in Robe-Ann Park. Parents are encouraged to bring their children, who can take advantage of nearby playground equipment.

Concertgoers are reminded to bring lawn chairs or blankets for comfortable seating for the one-hour performance, which is co-sponsored by the Greencastle Civic League and the Greencastle Park and Recreation Department.