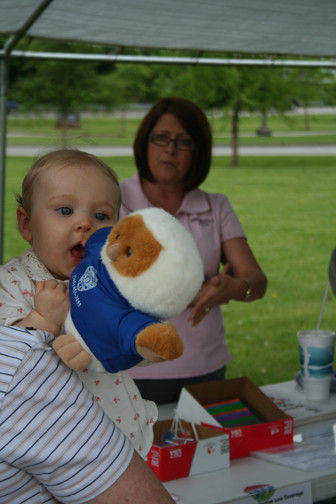 Darcy Hendershot, back, one of three trained child safety seat technicians with Greencastle Police Department, talks about the importance of properly installing a car seat. Eight out of 10 children in the United States are not properly restrained when riding the family car. In an effort to reduce the danger locally, GPD embarked on a project six years ago aimed at helping parents of small children understand how to properly install seats -- the Permanent Fitting Station.

One of the most important jobs as a parent is keeping your child safe while riding in a vehicle.

Each year, thousands of young children are killed or injured in car crashes. While there are several risk factors in a motor vehicle accident involving children, proper safety restraints have shown to reduce risk of death by 71 percent for infants and 54 percent for toddlers ages 1 to 4 years.

Reportedly, more than 80 percent of child safety seats are installed incorrectly. With that startling statistic, the Greencastle Police Department embarked on a project six years ago aimed at helping parents of small children understand how to properly install a safety seat.

"The safety seat should not move an inch and it should be locked at all times," said Darcy Hendershot, one of three trained technicians with GPD.

A child restraint system must be properly secured in the vehicle to provide optimum protection to the child in the event of a crash, states the National Highway Traffic Safety Administration. Free car seat inspections are offered to anyone through the police department and Putnam County Sheriff's Department.

Through the "Permanent Fitting Station" program, GPD provides a free car seat to qualified residents and weigh and measure the children to ensure they are placed in the proper seat for their size.

Another important fact many people may not know is their child's seat needs to be replaced if they've been in a car accident.

"You shouldn't buy used car seats either," said Hendershot. "You don't know its history or of any recalls."

Children depend on adults for protection and drivers are responsible for the safety of any child riding in their vehicle.

At minimum, infants to 1 year old and weighing 20 pounds or less are to be in a rear-facing car seat in the backseat. Children between the ages of 1 and 4 or between 20 and 40 pounds can be placed in a forward-facing seat. From ages 4 to 8 years, children must be restrained, including in a belt positioning booster seat.

Over the past decade, the NHTSA has shown a reduction in child occupant fatalities partly due to the use of proper child restraints. To help keep Putnam County children safe while riding in a vehicle, Hickory Creek at Sunset is hosting a fish fry from 4 to 5:30 p.m. Thursday.

There will be free DNA kits, face painting, ring toss and a very special treat for the audience -- Police Chief Tom Sutherlin will perform his dance routine from the local Dancing With The Stars.

Tickets are $5 and can be purchased in advance at GPD, Greencastle Chamber of Commerce, both locations of Old National Bank and First National Bank in Cloverdale and Greencastle or at the door. Ticket holders will be eligible to win a $100 gas card.

"It's a worthwhile program for anyone with young children riding in their car," said Hendershot.

For more information on the child seat program, call GPD at 653-2925. Anyone who would like to make a donation to the Permanent Fitting Station program can do so through Hickory Creek or the police department.