Tributes do justice to catalogues of Silverstein, Prine

The dual title of singer-songwriter is a troublesome one. While the two duties would seem to go hand in hand, they actually serve quite opposite purposes, in a sense.

A singer's job is to put his stamp on the song, make it his own. At his best, he performs it in a way no one else could.

On the other hand, songwriters, at least the great ones, are able to put pen to paper and come up with something not only they can perform well, but that many others can take and give their own twist.

With successful songs like Loretta Lynn's "One's on the Way," Dr. Hook's "Cover of a Rolling Stone" and Johnny Cash's "A Boy Named Sue" to his name, Shel Silverstein certainly proved his songwriting prowess in his day.

Likewise, John Prine has been covered countless times, as the numerous covers of "Angel From Montgomery," "Hello In There" and "Paradise" will attest.

As if we needed any more proof, a pair of tribute albums released this month prove the greatness of these two classics all over again.

Twistable Turnable Man: A Musical Tribute to the Songs of Shel Silverstein 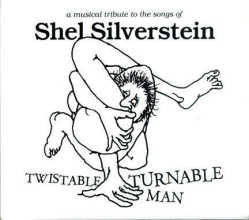 Most remember Silverstein as a children's author, and rightly so. Classics like "The Giving Tree" and "Where the Sidewalk Ends" were enough of an epitaph for this wordsmith (1930-1999).

But there was so much more. There were his adult stories (like the funny contributions to Playboy over the years) and there were the songs. Like a good songwriter, Silverstein always seemed bound to make you laugh ("The Cover of the Rolling Stone," covered here by Black Francis and Joey Santiago) or make you cry ("This Guitar is for Sale," covered by Prine).

At the best, there's a touch of both, such as in "Me and Jimmy Rodgers" and "The Winner," covered by Ray Price and Kris Kristofferson, respectively.

One of the highlights of the album is Nanci Griffith's musical rendition of "The Giving Tree." While not hearing the lyrics with Silverstein's illustrations in front of you is odd, those of us who love the book can see them anyway.

Part of the record's appeal is that its a family affair. Silverstein was a friend of Bobby Bare, and both he and Bobby Bare Jr. serve as executive producers. Additionally, Bobby Sr. contributes "The Living Legend" while Bobby Jr. and daughter Isabella are charming on "Daddy What If." The eldest Bare also writes a short but touching tribute in the liner notes.

Also worthy of note is the beautiful rendition of "Queen of the Silver Dollar" by Sarah Jarosz with Black Prairie. What a beautiful voice. 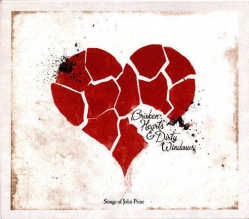 It's nothing new to hear artists covering Prine. He is revered by peers and so many who've come after.

But this record is interesting in that basically every act is a generation or two removed from Prine. While they put their own stamps on the songs, they also do their own Prine impressions.

Most obvious are Conor Oberst's vocals on "Wedding Day in Funeralville." While his voice could never be mistaken for Prine's, his phraseology is distinctly Prine's, and rightly so. It is his song.

Likewise, Justin Townes Earle's cover of "Far From Me" opens with guitar that sounds, for all the world, like the beginning of Prine's "Illegal Smile."

Old Crow Medicine Show's version of "Angel From Montgomery" is changed little from the original, simply made more bluegrass. The band actually performed the song with Prine recently at Bonnaroo.

The pairings of artist and song on the record are right on. On "Six O'Clock News," Lambchop takes a creepy song and doubles the creep factor. The Avett Brothers have a rollicking good time with "Spanish Pipedream." Drive-By Truckers take "Daddy's Little Pumpkin" and simply make it a funky, Southern blues romp.

Like Silverstein, Prine has a penchant for laughter and tears. The album closes perfectly with a sad one, Deer Tick and Liz Isenberg's "Unwed Fathers," next to a laugher, Those Darlins' "Let's Talk Dirty in Hawaiian."

Broken Hearts and Dirty Windows: B

The albums succeed, but for different reasons. While the Prine collection is more consistent and a bit better -- the Lambchop cut being the only one I can do without -- the Silverstein tribute works because it feels more comprehensive.

In Price, Kristofferson and Bare Sr., you have contemporaries of the artist. You also have younger veterans like Lucinda Williams and Todd Snider, along with current acts like My Morning Jacket and Andrew Bird.

My Morning Jacket really emerges as the heroes of the tribute album scene here. They contribute a total of three cuts to the two records, and all are outstanding. They may be heroes of indie rock, but they are also well versed in classic country sounds. To any tribute album producers out there: get these guys on board.

The real treat, though, is hearing a new spin on this great music and poetry. Silverstein and Prine are true gems, and it's good that other artists are proudly bearing the torch.